Now lucky I am 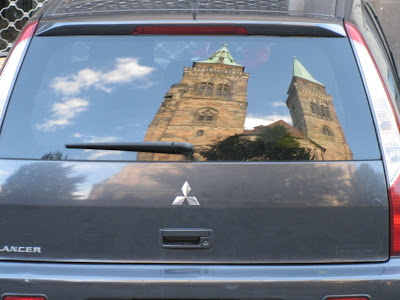 This posting is old, I just unearthed it. It had been lost somewhere during a busy two weeks.

Leaning on a lampost....

Sometimes I can not believe that I live here. Especially when I lean on the corner of the house where Albrecht Durer lived and where on the top floor he painted his famous rhinoceros, while I listen in the Sunday-sunshine to live rock-music from the nineteen-sixties and seventies.

All just a five minute walk from my front door. If it were not for the thick city walls surrounding the whole of Nürnberg I could probably hear it all from my balcony.

It is that time of year again

On Saturday I had the windows of the flat thrown wide open as the music school opposite performed its end-of-school-year concert. Despite a few rough patches, this personal live concert that I listened to as I painted was delightful.

On Sunday I went to the Bardentreffen

That is the annual weekend of free music in the streets and on fifteen special stages, all within a stone’s throw from home. There are several other make-do stages about the city too. The steps outside the Industrial Works Association, the steps of the Lorenz Kirche, the peak of the Museumsbrucke, all make perfect venues and gather the crowds.

There are children, teenagers, young, middle-aged and elderly performers. They include rock bands, folk musicians and digeridoo-players. There is the official programme, with many performers invited, this year many coming from Africa, and there is also the extra-programme of the buskers. All the buskers know to stand at least two hundred yards away from each other and to do twenty-minute sets to allow the audience to move on to the next artist.

It is one of the nicest weekends of the year in Nürnberg, especially when the weather is like it was this year.

I missed Saturday in the city because I was painting and in the evening I was at an open-air theatre performance in a village about ten miles away. There I saw a skit on the Nibelungen Sagas. It was really satirical with lots of really topical and political jokes, there was an amazing stage and surrounding scenery, and all produced by amateurs, both adults and children.

These sagas are quite complicated and my friend and I had quite a job beforehand understanding what Google gave us to read about them. We should not have bothered wasting our time on it, we were much better informed after the show! This was the perfect Nibelungen Sagas for foreigners and children! It was brilliant.

Sometimes I cannot believe how lucky I am. Nürnberg is a feast of cultural delights and in September the theatre season begins again!

What more could I wish for on my doorstep.

You make me such a very green man. Are all German towns and cities like that or is yours something exceptional?

There is too little foliage on those men, they are not as green as some of the others!

On my last trip to England I sat next to a lady on the plane who is part of the team organising all the summer action in our city.

When I congratulated her and thanked her on behalf of the several hundred-thousand of us who enjoy the fruits of her work, she also agreed that we have something rather exceptional.

The chocolate-box backdrop of course makes all the difference too.