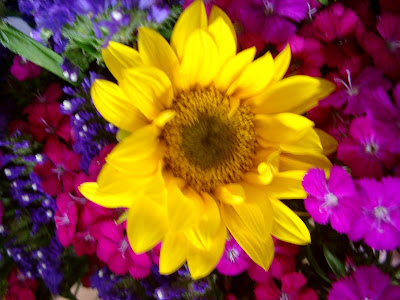 Sunflower time of the year" by Susie Mallett

...for bodies that work so hard all day

Last week I was working with a young man with athetoid cerebral palsy. As we were both trying to get our clasped hands behind our necks, then later trying to get our hands to meet in the middle of our backs, with one hand coming from above and the other from below, we were both experiencing a bit of difficulty. Stiff joints, wonky arms or lack of practice: for one or more of these reasons neither of us made it quite as we had hoped. I realised that I would have to do something about it. Without the manual therapy that I have been having recently, I would not be able to keep to my promise of not asking my clients to do something that I cannot do myself!

It seems that my client had similar thoughts!

Out of the blue he turned to me and with a glint in his eye said Ich habe eine Frage. I always know that something profound or cheeky will come after this statement so I waited to find out what it was this time.

He asked: “Do you think you could give me a massage this evening?”

What could I say? Certainly not No!

I offered him one on the spot, and suggested that as I was not actually at work in the evenings he could massage me then instead! He seemed to think I was joking but he took me up on my offer of a spur-of- the-moment massage for himself. After a bit of loosing up, his limbs and joints did as they were told slightly better than they had done before.

I do not profess to being an expert in massage. I did a lot of it over a period of twelve years for my friend who has multiple sclerosis. I learnt what muscles felt like when someone had a look of pain in the eyes and when something was doing good and reducing that pain. I have had several six- or ten-week sessions of massage and manual therapy prescribed to me by the doctor. I know when something is doing me good or not.

I think my client last week could do with a massage from an expert now and then. People who suffer pain due to tension in their muscles, for whatever reason, would benefit a lot from regular massages. My clients with MS all get massage prescribed by the doctor, my clients with cerebral palsy rarely do.

I have often thought that massage would be good for my clients and sometimes after I recommend it they go off to the doctor and get themselves a ten-session prescription. We notice a difference in their movements in conductive sessions when they do this, not only because limbs move more easily but, perhaps more importantly, because there is an overall feeling of well-being about them.

I know this from my own manual-therapy sessions. When someone has done a good job, like recently, I feel like I am walking taller as I leave the room. Most probably I am.

I have a seven-year-old client who has athetoid cerebral palsy just like the young man who asked me for a massage.

All day long, if this little girl wants to do anything at all, she has to tense the muscles in her whole body. She does this to prevent herself from falling in a heap, like a floppy rag doll. Of course we all have to do this, but we who have muscles that do as they are told do not really think about what we are doing until something starts to hurt or if we loose our balance for some reason. Only then do we need to work hard on our movements to correct something. Really it would be better to think about our movements all the time like this littlie does as it could prevent our aches and pains, but usually we do not!

This little girl of seven years has developed so many skills recently and she has also grown a lot, which makes life a lot easier. As I always told her, going to the toilet will be so much easier when she can do it without climbing on to a box to reach the slippery child seat. She has always been very determined but now she is becoming more independent too. She can now get her body working for her, so she can sit on a horse, walk with a rollator, wheel herself in a wheelchair, walk a few steps unaided. She can take part in races walking on her knees, stand up and, while leaning on the wall, play bowls. She can sit on the floor and paint amazing pictures. In doing all of these activities her little body gets turned into some amazing shapes, just like any child's who lies downs on the floor to draw and paint, do puzzles or read a book. Hugging a knees, twisting an arm round the back of the head, you name it she does it too, but her muscles are tense in her whole body unlike those of the other children, otherwise she would topple over.

I talked to her parents about how asymmetric this little one’s body was becoming. Together we decided to ask the physiotherapist around the corner whether he would be prepared give this littlie a massage a couple of times a week. We wanted to see whether this would help her learn to keep her body symmetric. He told us that the best thing for her is exercise. We convinced him that we do the exercise, a lot of it, but told him that sitting in school all day is hard work and no time then for much exercise.Walking in the playground is fun but it also puts a strain on the whole body. Conductive session each afternoon are also fun and also hard work, and also put a strain on the little muscles. He said that he would see what he could do.

He was surprised when he saw this skinny Littlie and even more convinced that exercise was the thing, but when he started the massage he agreed that the muscles in her shoulders and neck and upper back are a lot more tense than they should be. He felt this even when she was lying as still as she could on the bench.

After ten minutes Littlie realised too that it was actually a very pleasant experience and quite easy to lie still and be pampered! This was only the first session but even as we walked out of the building, her one hand in mine and the other on the banister, with Grandma watching and learning, I noticed that she could now stretch her arm a bit further to pull herself up the stairs.

Early days but I think we may be on to something that does our Littlie a power of good at the end of a long day, she looked really happy and cosy in the seat of the car as Grandma drove her the five minutes back home The report the next morning, after a warm bath and straight into bed was that there were no aching muscles, and Littlie was all set for the next massage sessions after a well earned holiday for five days on a local farmyard.