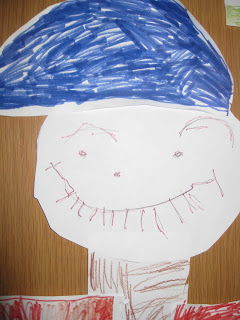 Each week, as my regular readers will know, I receive through the post my copy of the Guardian Weekly. I keep it with me wherever I am so that I can gradually read it before the next one arrives. During the week the paper is in my bag, in my bed, on the balcony, on the bus, or on the tram. I even read it sometimes while walking along the street and I have been known to read it in the interval at the theatre, but only when alone, of course.

I usually turn first to the crossword and the Sudoku (but only if it is a hard one). I return to the crossword later to complete the last few squares as I rarely finish it at the first attempt.

The Sudoku is a different matter. I usually finish that in one go or do half before falling asleep and the rest when I wake up.

At the beginning of this week I sat on my balcony with the crossword in front of me two or three times, but it squares remained empty, my mind a blank. I whizzed through the Sudoku but, with all but two squares to fill in, I realised that I had made a mistake. I rubbed it all out and put it on one side for a second attempt later.

I have had very little physical Conductive Education work to do this week. Some tidying up before the summer break at work, a few hours of sessions with adults, and I have had time for a few gentle walks through the city. I have, however, done quite a lot of thinking about Conductive Education this week, a lot of writing and planning, some translation for the Congress, and lots of writing for my book, poster and two presentations, also for the Congress.

It was English thinking, English writing, English translating that I was doing, as I was alone I even did the tidying up with English thoughts in my head.

Today I sat down for breakfast in the sunshine on my balcony and spotted the Guardian Weekly abandoned under the table, open at the crossword page. I nipped indoors for a pencil and before my coffee was finished I had completed the ‘hard’ Sudoku, it took about 8 minutes, probably a record for me. The crossword I finished even faster!

Where did that 'brain power' come from?

Was it more sleep?

Was it less physical activity?  Less group work? No daily round-trip of 20 kilometres on my bike.

Was it thinking and writing in English? But how does that explain the numbers in the Sudoku?

More power from the soul than the brain

I think the fact that I whizzed through the crossword and the Sudoku this morning has more to do with soul power than brain power.

With a week behind me of writing about CE, breakfasting on the balcony, lunching in the café, walking in the city, sorting art work and books, taking photographs, designing posters, making necklaces, sleeping under the stars and reading I think my soul has been well fed.

More important, for most of the time that my soul was being fed my whole body was functioning more or less in English. This is also good food for my soul as it is the easiest language for me to live in.

Conductors feeding their souls all over the world

Many conductors live and work in two, and perhaps like me, in three languages – English, Hungarian and German are my three. It is not only the languages that we use, we are immersed in different cultures.
I am English. When I am on my own, I think I am more English than if I lived in England! I have to switch to my living-in-Germany mode as soon as I step out of the door, even though often I have my English newspaper to read so I can slip in and out of both.

At work my Englishness is abandoned except for when the children practise the English that they learn at school or when we sing an English song. I am surrounded by the German language and culture but, with eight Hungarian colleagues, also by Hungarian culture and temperament.

Usually we do not notice how exhausting this all is on top of our normal run-of-the-mill daily CE lives, until it stops. We just do it!

One language for a change

I have recently realised that living in one language for a change has been rather good food for my soul.

It is hardly surprising that when a long break from work arrives that there are conductors all over the world, with souls hungry to soak up some home culture and language. Whether they whizz off to their homeland, friends and families, or do as I have done and escape to the balcony, many of us need to soak up the culture, speak the language, eat the food and do the things that come naturally, that enable us to energise our souls.

Sometimes having all the extra cultures and languages going on all at once I feel that my body and soul are like a piece of electrical equipment left on standby, with energy seeping away unnoticed, until the bill comes.

So I am sure that it was definitely soul power that enabled me to finish the crossword and Sudoku this morning and it will be soul power that powers me though my work in three languages and cultures until the next time I am able to do what comes naturally and be English.

This week was different to being on a proper holiday. I have been busy working, but just paper-working. Busy in English, in my home, taking it easy with a few bits of CE and a bike-ride or two in between.

It can be all too easy to forget

It is so easy to forget when conductors function extremely well in foreign lands just how strenuous it often is not just doing what comes naturally every day, but doing well what comes unnaturally too.

I wish all my colleagues around the world lots of opportunity to feed their souls and gain strength to solve the problems that come their way in whatever language, culture or circumstances they find themselves in.
Posted by Susie Mallett at 23:59 2 comments:

Recently I enjoyed a day dog-sitting for Guido, the dachshund. 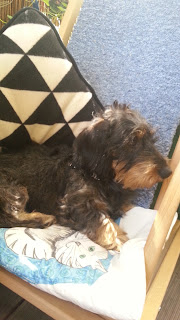 He spent the day at my flat and after an hour or so sulking about not being able to go out for the day with his family he settled in with just me for company. I enjoyed not being alone and  I think he did too. I also enjoyed having  to go out for walks during the day even though we did get drenched in a summer downpour.

In Nürnberg that same weekend the city had been celebrating its twin cities and on Sunday it was the turn of Kraków, Poland.

The celebrations took place in the Tucherschloß where there was dancing and feasting and at 3 o’clock the judging of 130 dachshund dogs from the region took place. With Guido’s family home again we were out in force to show him off at number 111! 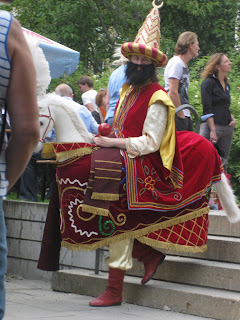 The Dachshund Parade began in the market square and foollowing a man in a traditional horse costume wound its way up the hill to the Tucherschloß. 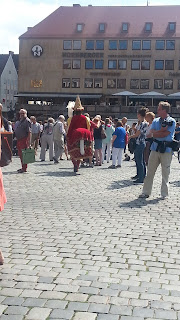 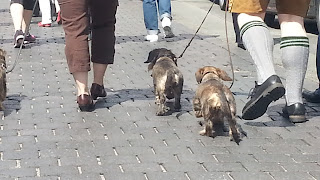 This is the first time that Nürnberg has re-enacted the parade that has been an annual event in Krachów for many years now.

You can read about its origins here –

I had not previously known that there are so many different types of dachshund, I like the Guido-type best of all!