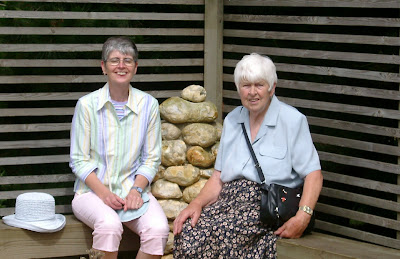 Me and my Mum on her birthday, during the "Silly Season of 2005
Das Sommerloch is the German name for what the English call the Silly Season, the summer hole!

It refers to this time of the year when parliaments throughout the world are not sitting. It has been reported, during this time when there is little of much interest to report, that several MPs from different countries are apparently not taking holidays. Some will be staying in their offices instead. Others are economising and some are going green, like Angela Merkel, by talking a walking holiday in the homeland.

Even with the MPs staying put, doing things right under the noses of reporters, there still seems to be no news for the political pages, or the front cover either. There really is very little news except daft stuff about the size of the largest marrow in the vegetable show, a survey or two that reveal nothing whatsoever, or complaints yet again about the cow-bells waking the tourists on the Swiss or German Alps.

Yes, the papers are full of silliness

Full of stories dug from somewhere in the depths, from down a deep hole, to keep Joe Blogs buying the daily paper.

The Guardian Weekly tells me that in Germany there is an unofficial name for this silly season, the Sommerloch, the summer hole. This is what the media call it but others call it the time of the sour cucumber!

The cucumber features in many other languages when talking about the silly season. Dutch has komkommertijd, Polish sezon ogórkowy and Norweigian agurktid. Hungarian has uborkaszezon and Hebrew Onat ha’melafefonim.

Could there be so many references to cucumbers because in many warmer countries this is the time of the year when you see jars full of pickling cucumbers out in the sun on the front door-step?

The dictionary and Wikipedia entries that I looked up suggest other origins. More than one of these says it comes from the German tailors who were working in England during the 18th century.

Spain has no cucumbers instead it has summer snakes. In Sweden there is a news drought, with silly season stories called rotting-month-stories. In France it is the dead season and its stories are old chestnuts.

This time of the year is strange

Although I do rather enjoy it. Most especially because cycling is so nice. There are less cars and no children on the streets. Taking the trams is far nicer at this time too, especially between twelve midday and one when school would normally be out. They are so quiet and empty of buzzing school children. Not only are the politicians not sitting, but just about everyone who has anything to do with education disappears for the summer too, or so it seems.

I was talking to a friend recently who mentioned that the summer holiday is almost over and nothing planned has been finished, some things not even started, and before one knows it it will be busy time again . This friend is someone whose whole life was spent in education until quite recently. I have several such friends, either retired or who had had enough and have gone into some other line of work for the last few years before retirement.

It is interesting that, despite no longer being tied to the school year, for these friends the term-time routine still has a huge effect on their lives.

The only way that I notice this silly cucumber season’s summer hole and drought, apart from the lack of traffic, is when my colleagues from the Kindergarten take a compulsory three-week break in August and I have to email or Skype them if I desperately need some advice.

I have only experienced the long holidays that my friends in education know when I was a student.

Since becoming a conductor I have been self-employed. I work on though out the summer. It is one of my busiest times and, being so busy, it is easy to avoid reading the daft stories in the papers!

I enjoy the quieter environment when I work in our centre, or the more relaxed school holiday lifestyles of families when I work in their homes. My clients are so happy that at least one of their weekly activities does not stop for six or more weeks.

Sometimes I miss my colleagues when I have a question or would like some advice, otherwise as far as work is concerned I do not notice a lull like my friends from education describe to me.

I do not notice that there is a cucumber season going on in relation to the amount or type of work I have. In fact it is quite the opposite and I certainly I do not make plans for any new projects of my own in the summer, there just is not any time. I still get the same amount of requests for advice in my email inbox, maybe even more as people are often on their holidays and have more time to think, and I still cycle to work each morning.

Then later on I take a holiday. Just when the roads get busy again and the trams get full and the chaos of beginning of term starts I will be weeding Dad’s garden