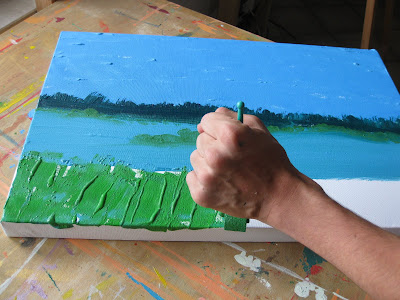 "Swedish lake with island" by SB,

Learning to dress and choosing how to dress

I have been involved in the conductive upbringing of a young adult since he was seven years old. This was just when he was beginning to learn how to control his movements enough to have success in dressing himself.

His clothes would always be placed on the floor for him in such a way as I, his mother or siblings thought would make it easier for him to grab hold of them and pull them over head, on to arms or on to legs. Over the years the positioning of his clothes changed as his skills increased and today he is able to fetch his own clothes out of the cupboard for himself. This means that he also selects what he will wear and can change if he gets dirty or needs to prepare to go out.

When I have worked at home with the family we have tried all sorts of techniques for putting on different items of clothing and, as my client grew and the movements in his limbs changed, so the techniques thast he used for dressing changed with him.

As arms and legs got longer and longer he became less able to move well on the floor/ Long gangly limbs just did not know what to do with themselves. There was no place to fix them on the floor so, as the clothes fell less often from his hands, he progressed to dressing while sitting on a chair or on the side of the bed.

Putting on shorts can also be attempted while standing, if there is a wall to lean on, but dressing in long trousers is a job carried out more safely when he is on the floor or perched on the side of his bed.

The difficult task of putting on his socks was the last item to be really mastered as a teenager and only then when they were bought a size too big! Now that this skill has also been learnt he can also pull on the size that he needs.

We are still working on the shoes and splints. The splints are on the feet now in ten minutes or less, he sits on the very last step of the stairs to do this, but doing them up I suspect will always be someone else’s job. Threading Velcro through those plastic hoops, especially when the Velcro is a year or more old, is not very compatible with athetoid fingers, but we will not give up trying and we still do it together.

This week we have moved forward yet another step

Only thirteen years after the dressing journey started with me, it started a lot earlier with his Mum and today the shoes were over the splints in a jiffy. The control in the wayward arms and the strength in the long squiggling fingers have improved so much, the knee can be bent near enough to the body and held there while the other hand can tightly grasp the shoe. There is now enough movement in the bones and muscles in the feet for him to squiggle his toes down to the point of the shoe while still keeping a tight grip on knee and shoe.

When I look at the clock and check how many minutes, my client does not quite believe how fast he is.

I am always surprised by the magic too.

There was more to come

As always it was not really magic, just a reflection of our long-standing relationship and the funny things that I do with the children, and adults!

For clients who are as tough on their shoes as this client is Velcro bindings do not give enough support. We have always chosen shoes with laces, just as footballers and tennis players do, as they stay tight all day.

For years my client and I tied the shoe laces together, with me holding my hands over his while I said a rhyme that I hadmade up. I based it on one that my Dad used while teaching me one of my Girl Guide knots, a sheet bend I think it was, with its story about a rabbit pooping out of a hole before running around the tree and hopping back in the hole!

This week with a client who is now twenty years old, I have often done his shoe laces up for him. It is such a difficult task. Sometimes just too much for him and he just is not up to playing games and doing it with me. It is not too much for him from the movement point of view, although this is why he cannot do it yet. It is the realisation again and again that he cannot do it alone that often upsets him.

One day, the day that we first had success with the shoes, he suddenly got hold of my hands with the laces in them and started to tie them with me while chanting very quietly that shoe-laces rhyme from his childhood. The rhyme takes the shoe laces step by step for walks, and forms rabbit ears, trees and rabbit holes, before the second ear is formed and a tight bow appears as if by magic. It is the rhyme that makes learning to tie laces such fun and something that I love to teach.

When this happened this week I almost jumped for joy! I explained my delight in discovering once again something that I did not previously know. That was that my client knows how to tie shoe laces while physically he still cannot do it.

He told me once more step by step exactly how I should do it for the second shoe. He also explained how when a few years ago he had wanted to go outside he too had realised that he knew how to tie laces. He had been able to tell his little cousin how to do it step by step in the same way as he had told me. This happened with his cousin long before the little cousin had learnt to tie his own laces.

My client was a bit surprised at my pleasure at discovering his skill until I explained how useful it is for him and how independent it makes him when, although he cannot tie his own laces, he can clearly guide someone step-up-step to do it for him.

I really do have such interesting work. Full of surprises, developments, influences and spiralling!
Posted by Susie Mallett at 21:14