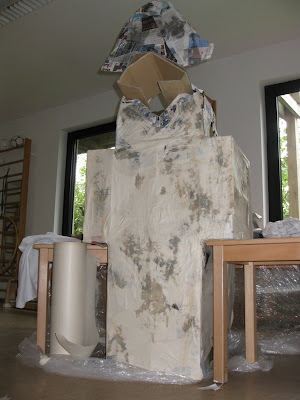 "Putting furniture to good use again!"

On the only second day of pirate-building, Jolly Professor expressed his thoughts that we were indeed a jolly good team. His pirate friend was coming along fine and he was really enjoying himself and his new-found skills. He was wielding a paintbrush like a master decorator and playing with new words like papier-mache and wallpaper paste just like any end-of-first-year schoolboy would!

He loved all the in-between bits, especially descending into the depths of the cellar to raid my crafty-cupboard. We “stole” lots of treasure to fill his newly created treasure chest and to decorate the telescope. While we were at it we stole a few more gems to use as buttons on Mr Pirate’s jacket. I hope that I shall find a parrot to sit on his shoulder while I am travelling around between now and September! All those seaside-shops on the East Coast of home are bound to have one.

Jolly Professor had said many weeks ago that he thought five days enough to create the walk-inpirate of his dreams. I think that he would have been right if we were still experiencing a heat-wave, but we are not. It rained and the papier-mache just would not dry.

Keeping in character Jolly Professor was happy to get the undercoat on and will get on with the real decorating when the summer holiday is over. The colours are all planned, the treasure chest and telescope stashed away, hidden from little brother and sister. A site or it has already been found in the corner of his newly decorated bedroom and Dad already organised for carrying it upstairs.

Sometimes it is really important to have littlies on their own. He was the only one not on holiday this first week of summer and he has thrived on all the attention. He is, however, willing to let other group members have a go at the final painting!

Watch this spot. For the one-legged pirate with his Norfolk parrot!
Notes
Jolly Professor, Part I -
http://www.susie-mallett.org/2010/08/jolly-professor.html
Posted by Susie Mallett at 22:52