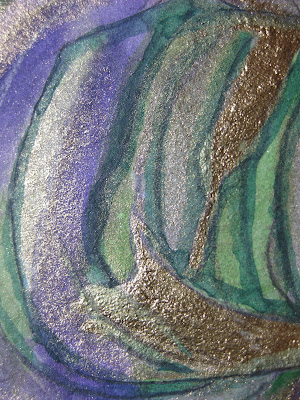 It was lovely to switch on the computer this morning to discover a Google Alert that has something to do with me and my "team":

School finished for the summer on Friday. We had so hoped that an article for which nine of the team had been interviewed several weeks ago would appear before the children went off for their holidays.

The article appeared this weekend! I set the conductive grapevine in motion and let as many as possible of the interested parties know so that they could get down to their local baker (the only shop open in Germany on a Sunday) to secure their own copies.

I have translated it for you, with the help of Google Translator!

Meanwhile they belong quite naturally (to their classes)

Felicia and Kilian played peacefully in the corner of the Inclusive Kindergarten Komet.

It is here that they receive a special education that has helped them to achieve, despite a severe physical disability, attendance in a mainstream school. Not only are their parents proud of these achievements, but also the entire team of the Verein für Menschen mit körperbehinderung.e.V. in Boxdorf.

For the past fifteen years education has been offered here (in Boxdorf) for the development of the total personality of children with disabilities using the teachings of Conductive Pedagogy. That these two first year pupils have successfully completed the first school year is due to the performance of an entire team.

Daniela Bernstein is the integration assistant for Kilian. She accompanies the eight year old during class, brings him to school and back home. She works closely with his teacher, his parents, Susie Mallett, who is an expert on Conductive Education, Petö , and with the other children in the class. In this way (the team work) has allowed the disabled boy to attend Siedlerstraße First School, learning to read and write along side his fellow pupils.

Playmate Felicia is also attending a mainstream school. She attends the Friedrich-Hegel-school. Her integration assistant, Esther Busch, advises the teacher and is there when Felicia, because of her disabilities, cannot yet achieve activities alone. Since 2005, the girl has visited the integrated Kindergarten (and subsequent conductive groups) and through this education she has made so much progress that she is able to successfully attend the mainstream school.

"At first Felicia was not able to do much, but she drove a Bobby-car!" recalls her mother Dr. Angela Wohlfarth. Then they discovered Conductive Education, which is orientated on the children learning to take part in everyday life. This "is different from the physio-therapy," says the gynaecologist (the mother). The concentration on the normal development of children, the holistic approach, have been good for Felicia, added the mother. The severity of her daughter’s disability is recognisable immediately she speaks. "I have fought so much because my daughter is intelligent," she continues, explaining her efforts to open up for her child a real chance of integration.

However, it was quite difficult. They received the promise of a placement at one school which was later retracted. That was painful. The Verein für Menschen mit körperbehinderung.e.V, Nürnberg assisted the family in their search for a suitable school. Anita Moss, the initiator of Conductive Education in Boxdorf, at the time also expressed her opinion on these unsatisfactory events, but it did not help. Therefore, greater is the joy that it has all now worked out so well.

Kilian's mother also had major concerns, before school enrolment, about which placement was suitable for her son. "Despite the integration assistance we were concerned whether he would be accepted," she says. In their case it also worked.

The successes that have been achieved by the two children, have been made easier by Anita Moss who has helped with the organizational trappings. The director of the Verein für Menschen mit körperbehinderung.e.V, Nürnberg has been the responsible for the meetings with the various local authorities responsible for the costs. "The association has covered all costs for the past nine months” she says. The school assistants must receive their wages!

Therefore Fr Moos also regrets the fact that "the fight starts over again from the beginning each time, because every decision is individual."

Fr.Moos admits that this individual and intensive support makes integration expensive, but we must recognise what these two employees have achieved and how the two disabled children have adjusted well into the class community. Integration assistant Daniela Bernstein has made a small survey among parents of Kilian's classmates and other teachers the results of which exclusively expressed in positive manner their views on this form of integrative schooling. Even the teacher’s initial concerns melted away quickly.

Of course not every child is able to attend a mainstream school, acknowledges Fr. Moss and often the opportunities arising from the conductive support, does not exist. Many doctors, also institutions of early intervention and diagnosis know far too little about it.

This education begins in early childhood. The starting point is a parent-child group. Susie Mallett points out that the children become more self-reliant and confident, and learn to do much more alone when they are part of an integrated community

The forecast for Felicia and Kilian is good. Felicia can later rely on the help of a speech-computer-system. Kilian is in the meantime relatively fit. The aim is to allow both an independent life. These is something that all parties are in agreement with. The fact that there are now two children who have achieved this ( integration), with the help of Conductive Education in the afternoons after school, should be encouraging to other parents to attempt the same. Even when this route is still not even a choice on the school application form.

Inclusion or natural progression? (Part I) -

Stories like that are the oxygen of Conductive Education

It really was a nice ending to a year of hard work for all involved in these two successful stories. To meet together for the first time and to be interviewed for this article really brought it home how much we have all achieved and how important all the good connections are.

I just hope that the people it was written for read it too. Especially those local authority officials who visited the children in their conductive group on the same day as the interview, those who could be financing the whole thing instead of the Verein!

Emma McDowell has sent me an email with a comment that I was delighted to read.

"I read this report with utmost delight and interest. The method of school plus continued daily conductive education was always practiced as such with walking, school-age children at the original Villányi Institute, Budapest. Conductors accompanied children who were borders at the Institute, over to the mainstream school in the morning and back again at midday, when the children in Hungarian (and, apparantly, German) schools finished their regular lessons.

I saw the children walking, with sticks and often in their special „drainpipe” boots, across from the Institute and its back garden, over to the quiet, uphill street behind, where the mainstream school was.

I am so glad these German mothers were able to fight for the integration successfully. Please tell them so for me."