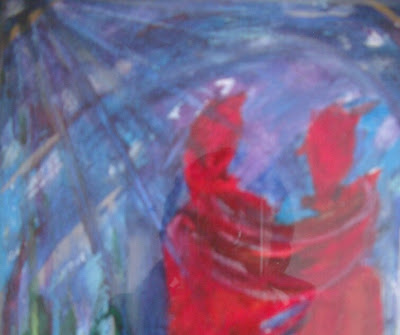 My friend and colleague gave me a big hug just as I was walking past her on my way to collect a potty. That‘s team work for you, seeing what is needed and spontaneaously doing it. Or in this case giving it and receiving it.

I really needed that hug, it made the rest of the day go like a dream!

Helping out, oiling the wheels

It is not really my group that we are working with at the moment. It has just turned into it for a while.

We share the leadership of the groups and this one is usually my colleague‘s responsibility. It is the group with five members and five mother tongues, the one with the children who attend the integrated Kindergarten. I have informally taken over its running, for this block only. This happened sort of spontaneously when for the first few days of the block my colleague had lost her voice and was feeling quite poorly, but not quite poorly enough not to be at work. She couldn’t lead any programmes though as no one could hear her.

Later on, although my colleague‘s voice returned the leader of the Kindergarten did not. She was signed off sick for several more weeks. My colleague is now needed early each morning in the Kindergarten, which means she cannot spare time to prepare for our group too.

So I spontaneously took over

I enjoy doing all of this with the very small children, but I find it very hard work. Five years ago if I had dared to give it a go I would not have been as good at it as I am now. I doubt too that I would have said then that I enjoyed it.

I have changed a lot. Now at fifty-two years of age I can enjoy rolling around the floor, playing, telling funny stories, putting on funny hats, and generally playing the fool. Today I was even chasing a stray cat around the room. He jumped in the window as we were breathing in the minus-fourteen air!

With it being that cold outside it was no wonder the ginger cat wanted to stay with us, and that I had great difficulty in catching him. The screams and hoots of laughter from the children and staff of course didn’t improve matters.

Perhaps it was the fun that we were having attracted the cat more than the warmth.

The children in the group are only four years old and younger. I do not feel that I am at my best with this age group, not least because I cannot sing but every day, when I ask whether my colleague is well enough to take over again, she replies:
”Oh, but you do it so well.“

I can tell by her voice that she means it. The children seem to have fun too and they are learning so much. And so am I.

“Just another day“ has turned into two weeks and, as there is only one more week to go, I expect that things might just as well stay as they are right up to the end. The only thing is that I may need a few more hugs before we get there. As the observation and the spontaneity are always there, I expect that the hugs will appear at just the right moment, as always.
Posted by Susie Mallett at 23:14