The set has changed in my small part of the world 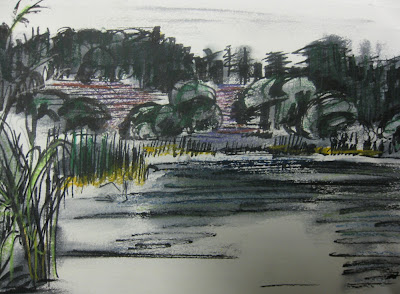 Winter, somewhere in Southern England in the 1980s

...I see it for the first time in a week in daylight and it is grey from top to bottom, no white snow no blue skies. Just greyness. It is the sort of greyness that seeps into the bones if you let it.”

The above is part of an email that I sent to an arty friend who replied that it should be called “no weather” and that today is the colour of the paper that is just perfect for painting on.

I prefer white paper, as it makes the colours sparkle even if the colours are just greys.

The wet, melting snow has dried up, so today has a uniform light-grey greyness. No dark, wet tarmac and light grey skies any more, just the same tones of warm and cold greys.

As I walked to the tram stop this morning in what could be called daylight, it took me quite a while to work out what was different in my world today. It is not only the greyness. The streets are untidy!

The streets and pavements are full of that awful grit that gets spread everywhere by the Winterdienst, those tiny crunchy stones mixed with salt that make shop floors black and ruin shoes, wooden floors and lino. These stones have been covered by layer upon layer of snow and ice that has now melted to reveal the rubbish. This is not only the grit but also the left-overs from Silvester. That’s the New Year celebration when millions of Euros went up in smoke leaving rocket sticks and plastic bits and pieces from fireworks littering the streets.
This New Year's rubbish is usually cleared away by the street cleaners on the first working day in the year. Not so in 2010 as by the time the weekend was over most of Germany was covered in a blanket of snow.

Today the street-cleaners are out in force. Even in the underground trains there were cleaners with brooms and shovels getting rid of the grit. I even saw a chimney sweep doing his rounds.

Germany is doing an early spring clean, it is getting the disorderly world in order again.

As I waited at the tram stop and watched the mini street-cleaning-truck running up and down the tram lines I thought about how right Judit Szathmáry is in her blog posted early this morning. But it is not only in the CE environment that we need to find some order. We all have times when we need to put our world in order, so that we can get on with the next stage. I often need to do the housework before I can even think of doing anything jolly or finish the six paintings that I have on the go before I start a seventh.

I don’t think that we have seen the last of the snow. It is too cold and too early to see any signs of spring, there are no snowdrops to be seen yet peeping through the snow-flattened grass.

I am sure we will see more grit and salt on the streets before winter is out but now the way is cleared for the next snowfalls and the remains of the old year have been swept away. There won’t be a rocket stick to be seen by Monday.

Germany is looking spick and span again, but in my part of the world it is still very grey.

PS Lets get the weather in order too

Nürnberg has had less sunshine in the last four weeks than anywhere else in the country, just twenty- four hours, so my stroke client told me this morning. She is also waiting for some sunshine.
I just got another email from the same arty friend, suggesting some cloud-clean-up action for a making a brighter day:
“You blow your breath against the sky and I will do it too. We will start a little hurricane and perhaps in the middle, in our eye, we can see the blue sky”!

Well it is worth a try, then perhaps I will paint what I see. But only when I have finished the painting still on the easel!