The dangers of city life 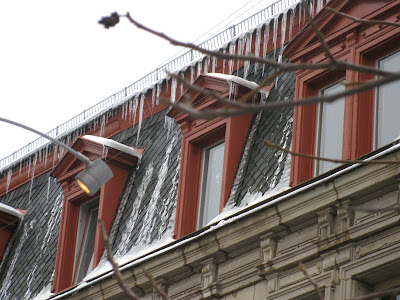 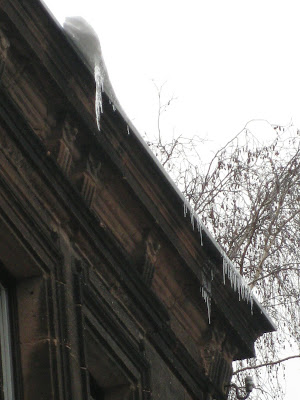 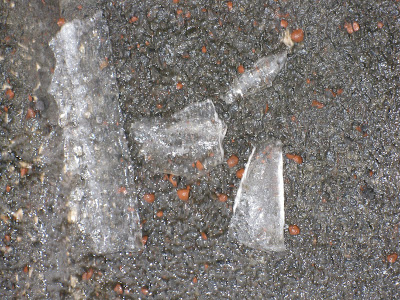 I was able to go outside today without a hat on. It was nippy, but not painful as it has been all week.

It is getting just a bit warmer and the sun has been shining. The snow is easier to walk on without riskingwringing an ankle on the lumpy, frozen bits. A few people were out and about with their shovels, trying to move the piles of softer, greying snow from their gateways. More snow is forecast for tonight and it has to go somewhere. Space has to be made for it.

In some parts of the country the corporation trucks come round and scoop it all up from the sides of the roads but it probably won’t come to that yet, especially here in the city where it is always a few degrees warmer.

Tonight there will be a danger of black ice forming on the wet streets.

Today there were day-time dangers that I hadn’t come across before.

As I came out of the supermarket there was a lady looking very perplexed, wondering why one of the wing mirrors from her illegally parked car was lying in pieces on the pavement. It hadn’t been knocked off by a passing car,as it was the inside mirror that was broken.
On seeing her arrival a delivery man and witness crossed over the street to tell her that the culprit was a huge lump of ice that had fallen from the roof of the five-storey building beside her. She was lucky that she had not been standing there herself.
Achtung!

As I made my way home, keeping well away from the dropping-zone and sometimes actually walking in the road, I realized that the pavements beside the apartment blocks were strewn with blocks of ice and the sharp points of icicles. Looking up I saw that there werere now huge gaps in the rows of up to fifty-centimetre-long icicles. Compacted snow is creeping over the edge of the rooftops, waiting like an avalanche to come thundering down. It is getting dark so it will freeze again in the night which will stop the glacial-movement for today.

In the city the dangers are of lumps of ice and icicles landing like spearheads on our heads or on the cars. In the countryside it is the trees that are dangerous, and there have been warnings not to take walks in the woods for the next few days.

As can been seen from my recent photographs, over my the previous postings, the snow is freezing on the trees and making branches so heavy that many are breaking off under the strain.

So yes, it is warm enough to go out without a hat but it may be advisable for the next couple of days, in both urban and rural areas to put on a helmet and, whether snowing or not, to walk around with an umbrella up!
Even out on my balcony I was in danger as I fed the birds this afternoon. I heard an avalanche of snow coming and ducked quickly indoors, just in time. And even as I write I can hear ice crashing down on to the windowsills from above.
Posted by Susie Mallett at 20:26

"Very interesting...', as the little German chappie in Wehrmacht uniform used to say each week on Rowen and Martin's Laugh-in.

I don't suppose that the Stahlhelm is looked upon with much favour as outdoor street-wear in modern-day Germany.

I would anyway slightly favour the Anglo-American 'Brodie-helmet' for your immediate purposes.

You might be happy to sacrifice the Stahlhelm's greater protection against small-arms fire in favour of something that is both a little lighter and offers a little more protection to the shoulders.

And it would have the further advantage of offering a distinctive statement, of something.

Yes, I really could do with a tin hat!

It is even more dangerous today. There is a dent in the car parked beneath my window! Huge lumps of ice fly about all over the place. I am brought to attention every so often with thundering ice blocks hitting my window-sill then on to the cars beneath.

I decided to have a Sunday indoors.

I have noticed that the majority of people out and about today are walking in the middle of the streets. A very wise decision.

That’s German efficiency for you. If the big thaw had come tomorrow with all the work traffic it would have been much more difficult to avoid being bombarded with ice from above.

I may risk taking the bike out tomorrow it could still be safer than using the pavements, depending of course on what the temperature does during the night.