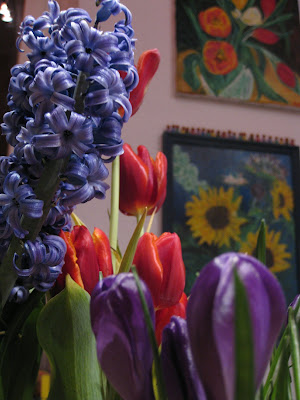 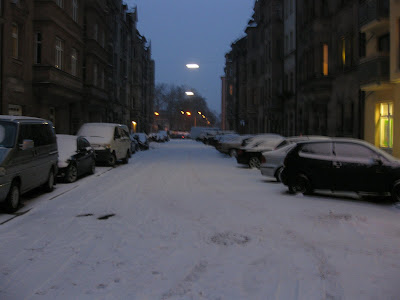 Because I am me

The sun came into my life at least three times yesterday, and not because it at last peeped through the grey, cloudy sky. It didn’t do that until today! They were three rays of sunshine, however, that I felt inside me.

Yesterday morning, though still dark, I discovered some "rays of sunshine" on the breakfast table. The spring bulbs had sprung overnight and there were the bright colours of daffodils, tulips, hyacinths and crocuses to greet me, all smelling as delicious as my coffee.

The second rays appeared when I stepped out of my front door. Still no real sun but as dawn was breaking, I discovered that my grey world was once more turning white. And what’s more it was being covered in the softest snow imaginable. that warmed me like the sun does too.

The third rays of sunshine turned up towards the end of a lovely day at work.

Human sunshine, a shaft of insight

I was in the bathroom helping one of the littlies.

Many of the best conversations with children take place there.

Only last week I had a conversation about learning French with a seven-year old in the very same spot. He told me all about his "botte noire". I surprised both him and myself by knowing what he was talking about, although I have no idea how to write it down!

Today I was with another bright-as-a-button Littlie, this time only six years old. She is at the stage where she is learning very quickly how to do many things alone. She could do even more if she weren't quite so little. If only her hands were bigger or her arms longer and her legs just that little bit longer and stronger.

These are problems that she encounters every day. We try to use whatever is at hand to help her achieve her independence in as many situations as possible, despite being such a littlie!

When I say "we" I really mean that it is she who makes the discoveries. She finds new solutions. I just follow the directions of her eyes or listen carefully to her speech as she indicates what she needs.

She always knows and I am always amazed by her, and she knows that too.

Today there were some very light-weight four-point sticks at hand so I grabbed them and placed them beside the toilet, thinking that, because the hand rails are too fat for her to grasp and too far apart, the sticks might be useful for when she had to hop down.

I returned to find this little girl still sitting and fumbling with the sticks. At first I wasn’t sure whether she was just playing with them, with her jerky athetoid movements making them move, or whether she wanted to move them.

I asked Littlie if I could help her with something and between us we turned the sticks round so that the narrowest section of the handle was facing her. She knows better than I do how big her hands are and where she wants to hold on! As we were not intending to walk with the sticks I hadn’t given much thought to how I had placed them but obviously she had done so while I was away.

As always she knew what she was doing and what she wanted and, as it turned out, she intended to walk with these sticks too (but that is another story!)

I was astounded as I often am when in a completely new situation this littlie knows exactly what she needs.

Today I asked her how this can be. I asked how it can be that she always knows better than I do, even when we are in an entirely new situation.

How does she know as much as she does when she is only six years old?

She looked at me, rolled her eyes up to the ceiling as if exasperated, spoke loud and clear and said:

"Because I am me"

I asked her whether she also meant that, because I am not her, then I can't possibly know? She answered "Yes".

And because she knows, now I know too.

The perfect end to a lovely day at work.

I loved this story. Thanks, Susie.

Wonderful. Thanks for capturing that one. I wish my boy could TALK!!

Susie, I loved it too.
Laci

Dear Susie,
Reading your posting also warmed my heart. Isn’t she just an incredible girl? She listens and trusts herself. There is a lot to learn from our children!
Kind Wishes, Judit

Thank you all for commenting here.

I love working with this group they are all incredible not only this little girl, and as Judit says there is a lot to learn from her and the other children.
This particular littlie really does know herself inside out.

She does not only talk with an ever increasing number of words but she also talks with her whole body. She is an expert at communicating with her very expressive eyes, with a shrug of a shoulder, a turn of the head or with a wave of a hand. With an increase of pressure on my guiding hand she tells me which piece of chocolate cake she wishes to eat next and with a blink of an eye she indicates which box she wants under her feet.

I love communicating with her in this way as well as rejoicing in her increasing ability to form words.

I have to be quick and very observant so as not to mix up these movement "sentences" with her involuntary, jerky movements.

I nearly always volunteer to walk with the children to the bathroom because it is on the walk there or back that they have time to tell me such special things or to discover things about themselves that they didn't know before.

It seems that the break from the group and the one-to-one attention gives them the opportunity for this.

Once more thank you all for letting me know you are out there reading my blog.

Best wishes to you in your own special environments.

Im in total agreement of what have been said before. Nice orthofunctional personality your little one displays. Such a great story that reminds us (or at least me) that "der Weg ist das Ziel" (the way is the goal).