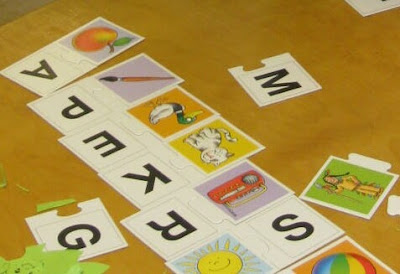 Just a snippet from my day

How is this for a good bit of conductive upbringing?

I have worked with the lady I visited this afternoon for many years, and today I learnt something new.

I already knew that she played Scrabble with her husband but I had assumed that they had done this pre-stroke too.

Today as I arrived for work the Scrabble board was on the table. My journey, despite the deep snow, had taken less time than I had planned, so I had caught them in the middle of their game.

I asked them how different it had been when they played after she had the stroke. I was surprised to discover that they had started playing only after the stroke, and that it was my client’s husband who had initiated it all and not a speech therapist or an occuptional therapist.

The husband had tried to work out how, as a layperson he could help his wife learn to read, to spell, to recognise and understand words, and generally to improve her communication skills. He went out and bought a Junior Scrabble board and set about his “upbringing” (for want of a better word).

He began with setting out the words himself from the letters that his wife had chosen, till slowly but surely she could find words, just short words at first, for herself.

They progressed to an adults' Scrabble board and this Christmas they treated themselves to the deluxe version.

What else I discovered today was that what had begun for my client’s husband as a means of helping his wife to begin communicating again has now become a passion. He told me that they still play every day and, what is more, nine times out of ten his wife wins!

On hearing this story I thought that it is not at all surprising that, when this family first heard about Conductive Education, thirteen years ago almost to the day, that they phoned me immediately.

They liked what they learnt about Conductive Education and are still as convinced now as they were then that to live conductively is their way forwards after a stroke.