It snowed the right kind of snow 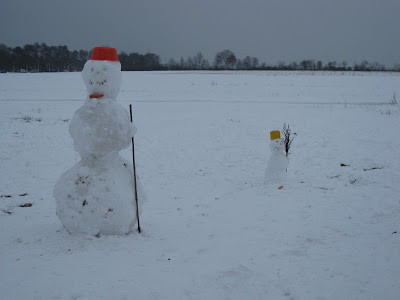 How many times do we hear that a train was delayed due to the "wrong kind of snow"? In Nürnberg we know all about the wrong kind of snow. It has been falling here all winter. Now, though, for the first time during the big, grey and snowy winter-chill, that has lasted for weeks, we at last got what we have been waiting for.
The right kind of snow!

For many people it was still the wrong sort of snow as it is the warmer snow that makes the streets in the city really wet, messy and slippery. But for those of us who enjoy building snowmen and having snowball fights, it has been just perfect.

The children at work had been so disappointed with the wrong kind of snow falling day after day. Snow that just crumbles as soon as it is picked up. So soft and dry that no amount of squeezing and patting would make it stick together. That's not much fun for anything other than sledging, and there are not many hills near our Kindergarten as you can see in the photograph above.

On Friday afternoon, as I walked across the snow-covered fields to work, I saw a sight that I realised had been missing all these snowy weeks. There outside the Kindergarten, standing as large as life, were two snowmen, the first that I have seen this winter.
I had missed the building action, this had taken place during the morning, but the results were there to see.
The temperature has dropped overnight, the wrong sort of snow is falling again, so I expect that the chilly sculptures will still be there to greet me once again on Monday morning, complete with carrot noses and matching orange "hats".
Posted by Susie Mallett at 00:34