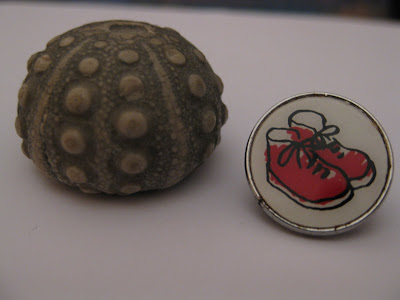 The history of the red-boots pin. Part II
Do you remember that a week or so ago, over on Andrew Sutton’s blog, he and others were wondering whether the sale of a “Red Boots” pin on eBay was something to be sad about or not. Then both Elliot Clifton and I wrote about the memorabilia that we have from our Budapest days.
Sometimes wierd things happen

Throughout my travels and my working life I have been accompanied afar and near by various friends from around the world. They were always there with a postcard, a phone call, or even a visit, to make lonely times less so and to have fun times from whic to create happy memories.

I just tis afternoon received an email from one such friend, a friend who also reads each and every word on my blog. A friend who twenty two years ago pressed into my hand a millions-of-years-old fossil for me to take on my trip around the world. With it were the words “If this tiny object can survive alone in the ground for millions of years then you can survive for six months”. I have taken this precious object with me everywhere I have been since, just stuck in my jacket pocket, and we are both surviving today!

After telling me in today’s email all about the temperatures and the snows melting in England, and about how the weight of the snow has damaged his hedges (he is, by the way, a geography teacher and a geologist), he then wrote the following, just like that, as if it was an everyday piece of news:

I won the little shoes; I put a pound as my max bid and sort of forgot about it. There were no other bids! They haven't arrived yet but I have bought an expensive, dark grey formal coat for winter hatches, matches and dispatches and I will put them on it. Connections and all that.

I wonder at my not having already given this friend a “Red Boots Pin”. A bit neglectful of me, really, after all that that his friendship has given me throughout the years.

I can’t think of a better home for that eBay pin. I am sure that it will remain for ever on the lapel of this expensive coat. Maybe I will get a photograph of it for Part III in the series "The history of a red-boots pin".
Posted by Susie Mallett at 21:17

At last I get a mention on the blog after all this time! Hemicidaris, I think, found on a beach in northern France from the Jurasssic so about 150 million years old. The red boots arrived safely and are now on my coat and will probably remain there until I too pass into fossil history!
Always interesting to read about the Conductive Education world. Keep up the good work Susie