A conductor’s “Bit in Between Blogging” story 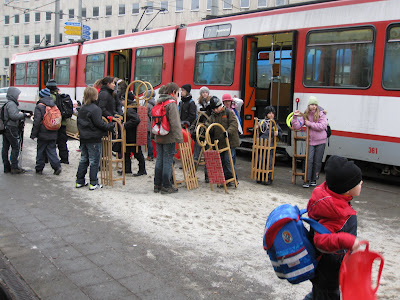 After a trip to the dentist and a tram ride across the city, on which I encountered the scene in the photograph above, I spent several hours today at the computer, answering mails and posting all the blogs that have been collecting in my head over my short holiday, in my notebook and in my lovely, new little netbook .

One of those postings is about how the fashion guru Gok Wan is helping disabled people, mostly women I think, care for their appearance, improve their body image and raise public awareness of disability.

Taking a break from blogging at last, I made a cup of tea and sat down with both the 2010 Guardian Weeklies that arrived together this morning. My attention was caught immediately by the headline of the Weekly Review in the 08.01.10 edition: "Look beyond appearances”.

This is the translation from Lingala of the name of a band from Kinshasa, Congo: Staff Bendi Bilili.

Looking beyond appearances, this seemed to me quite the opposite to what Gok Wan is doing in his new show.

I read the three-page spread and let my cup of tea get cold!

Staff Bendi Bilili band members have all been left disabled by polio. They have been on tour in Europe and have been presented with awards for their music in Copenhagen. Their first album, recorded mainly on the streets of Kinshasa is called Trés, Trés Fort.

I did a bit of googling and found them on YouTube. At first I listened to what appears to be jamming in the streets and then to a song called Polio, with the words appearing in English on the screen. Polio is a song telling parents to look out for their children, to prevent disability and to care for those with disabilities.

It has quite a punch behind its gentle melody.

The band’s first album was recorded in Kinshasa Zoo, at night to avoid too much traffic noise, as there is no recording studio in the city.

Have a listen for yourself: