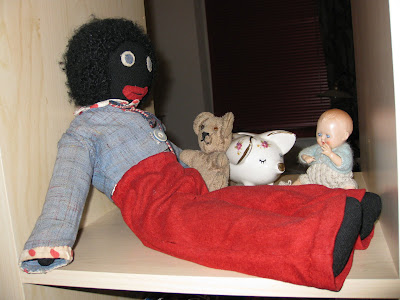 Between getting that last long posting sorted yesterday and warming up after travelling home in the cold, I read my favourite magazine that arrived on Saturday from England. Actually I was not reading the whole magazine I saw something staring at me from the cover and immediately turned to that page.

Noddy has made a come back!

To celebrate this evergreen three-year old’s sixtieth anniversary Enid Blyton’s grand-daughter has written a special edition, Noddy and the Farmyard Muddle. The book is illustrated by Robert Tyndall, one of the many artists who have succeeded the original artist, Eelco Martinus ten Harmsen Van der Beek.

I liked Noddy in his “red boots”, I wasn’t very fond of Big-Ears although he was my sister’s favourite. I loved Mr Plod. Mpost of all, though, I loved the Gollies. It was through reading these books with my Mum that I fell in love with gollies!

I had lots of golly-badges, collected by saving Robertson’s jam-labels, and I had three golly toys.

I remember so clearly the day that I was bought my loveliest golly, dressed so smartly, he even has a tie. I was about four years old at the time. It was just about the biggest “doll” that I ever owned, bought for me by a friend of my Grandma's.

We called this friend “Auntie Dick”. I have no idea why, as her name was Lilian Rump! She had worked in the same garage, keeping books with my grandmother in about 1920 when they were both young girls. I remember my Grandma telling me that Lilian had always been called Dick. Perhaps her father had longed for a boy!

Auntie Dick used to do such wonderful things with us. Like pretend she had lost something very precious down a drain and stand in the street pointing it out to us, and we would believe her, and crowds would gather and want to help her recover it. At other times she would point in amazement up to the sky, as if she had seen a wonder, and all the world would look up, searching for the object of her joy.

When we were a bit older, but still young enough to enjoy the joke, we caught on to what she was up to and egged her on to do it for us,whenever we met her. Sometimes I would pretend that I wasn’t with her so that I could stand by and watch the reactions of the passers-by. Grandma very often turned her back on us all!

As teenagers my sister and I took on the same habits as Auntie Dick. We got quite good at it but never as good as Auntie Dick had been!

I had almost forgotten that we did such daft things. My Grandmother said that she would sometimes disown her friend when they were younger, as she got up to such "dreadful" tricks

My mum kept a wonderful picture of the father of this Auntie dressed up in feathers and finery as the Carnival King in Gt Yarmouth, probably in the 1920s. I must hunt for that photo when I am home.

They are very hard to come by these days and there is not one to be found in the new Noddy book, not even manning the garage. This is, I presume, because they are politically not quite correct.

I still have Auntie Dick’s well loved Golly sitting beside my bed. He hasn’t moved an inch for almost fifty years. Just flown a few miles, but always to be beside my bed. He is there now, complete with original outfit, even the tie didn’t go missing! He sits beside the even older tiny teddy that the same Auntie’s older daughter passed down to me when I was six. I loved that teddy too, so much so that he no longer has a hair left on his head. That Tiny Tted really did go all over the world with me in my suitcase, whereas Golly had to spend a few years lodging in the family home without me before he returned to my bookshelf!

My favourite magazine –
The Best of British
http://www.bestofbritishmag.co.uk/

The first link cannot be opened because of the bracket not workins, so please cut and past to view it.