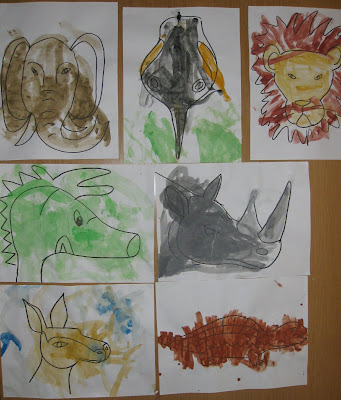 This week's works of art 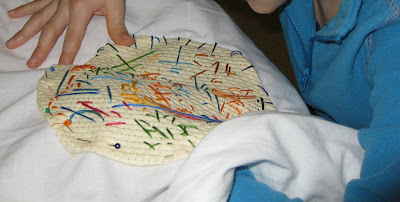 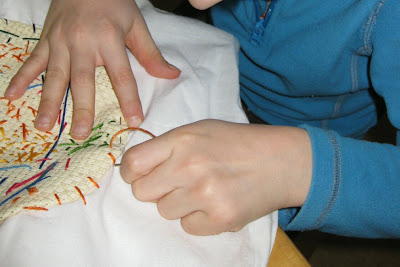 After thirty-six hours back at work I am exhausted. We are putting it down to the weather but it is probably because of staff shortages.

I jump into all the empty spaces and do my own work as well. I am not complaining. I was about to say that I love it. My work is so diverse. I find every exhausting minute of it exciting.

This week I have had four mornings with four-year-olds from the integrated Kindergarten, at long last working again with my colleague.

I have had two afternoons with a seven-year-old (with six years of CE behind him), who is coming on in leaps and bounds since he started mainstream school in September 2009. One of these two afternoons was with his mum there watching us, clapping, enthusing and gathering info.

I have spent one afternoon in the office writing the letters-of-invitation to clients for the next adults' block. That was the one time this week that I felt like tearing my hair out, as computers and me only rarely go well together except in my blog-writing.

I have had one wonderful art-therapy afternoon. That is often one of my favourite bits of the week. The young man who was there this week is also coming on in leaps and bounds. We are all smiling because he decided for himself, for the first time in his life, that he needs a haircut, and asked for an appointment to be made for him. Maybe soon he will be picking up the phone and making the appointment himself.

Last but not least there was the CP adults after-work evening group. The members of this group are at last, after much practice, organising their next cooking evening themselves. I don’t have to do anything in advance, just turn up next Tuesday to cook with them. They are inviting the guests and organising the shopping for ingredients themselves. That has taken several years of routinely cooking the same few dishes on birthdays. This has of course been more work and preparation for me than in a “normal” Petö session (what’s normal?) but not any more. We appear to have achieved orthofunction, although the proof will be in the pudding, or in seeing whether they turn up with all we need for our party.

The next step? When I don’t turn up for the cooking, only when the meal is on the table!

As well as all these groups this week I have been stepping into the breach at lunchtimes in the integrated Kindergarten to make sure that all five members of staff all get their allotted half an hour off. All I have to do is to sit at the table with the integrated children and make encouraging sounds, and practise all we have been learning, making sure that their drinks get to mouths and that knives and fork are used as they should be. checking that teeth get cleaned and hands washed before the Stillepause.

To finish off the working week I have a home-visit tomorrow with one of my stroke clients and then, when its all finished, a lovely cup of tea with a friend!

Highlights of the week

A twenty-six year old young man cleaning the paint off his face and hands himself. I delighted in seeing him getting unusually messy and also in the knowledge that he can at last go to the bathroom to wash away this mess on his own.

Fours days' worth of painting hanging on the group door!

The four-year olds were really amazed that they could order, like at a take-away service in a burger bar, the animals that they wanted to colour in. Mesmerised, they watched as an outline of their chosen animal flowed out of the tip of my thick felt pen.

It was only the second or third time that they have used watercolour paints and they loved painting such enormous animals faces. We will stick them on cardboard and make masks. Yes, its that time of year again, doughnut time, carnival time, Mardi gras! Time for dressing up in daft clothes!

A child who as yet reacts to very little in the group crawled over to the switch and put the light on early this morning. He was the first to arrive on yet another dreary morning, and we needed some light. I admit this this didn’t happen of his own initiative, I asked him to do it, but I really did not expect him to do it so spontaneously. He just up and went and then we had light!
That showed me! My always very high expectations have risen no end since that happened.

A diplegic boy who still stumbles constantly over his own feet, as he has yet to learn where the floor is or what is on it, sewed a wonderful birthday present for his father. He may yet need to conquer the stumbling feet but he has conquered many of the problems with the stumbling hands and now has nimble fingers. He has learnt what is up and down, and what is inside and outside. He uses pens and pencils skilfully. It is just the scissors that still cause a few wrinkles to form on his forehead. However sharp they are, he just cannot cut the thread because he pulls the blades apart.

When sewing I showed him only once how to negotiate the cloth with the needle and he was off, all the time delighting in his own skills, showing his joy by giving me a running commentary on what he was doing. My colleague told him to steady on and not to do so well, as she could see he was soon going to reduce me to tears. Happy tears.
Highlight number five

Praise from my colleague this morning. Once for a jó fekvö (a good lying programme) and again for the fifty-two sit-ups that I did. I always ask the children how old they are and, if they can, they sit up that many times. If they can’t then we do some maths and they use the resulting number. Sometimes they don’t tell me the truth, pretending to be younger, and they get away with that too as we enjoy the joke so much.
As I can I didn’t get the chance to do any maths to reduce my age! I had to do all fifty-two sit-ups. The littlies loved it and started to join in, and did at least five more to add to their totals.

Some of the advantages of working with colleagues are giving and receiving praise, giving and receiving motivation. Feeling a sort of reassurance. Having a different kind of fun. Enjoying success together. Getting a cup of coffee at break-time!
I look forward to the highlights of next week, but only after a weekend of bits-in-between for conductors and hopefully the return of the sun. We haven’t seen much sun in Nürnberg since the beginning of December.
Posted by Susie Mallett at 22:29