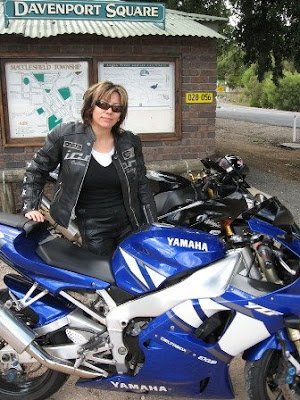 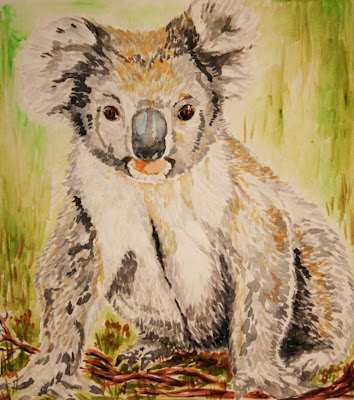 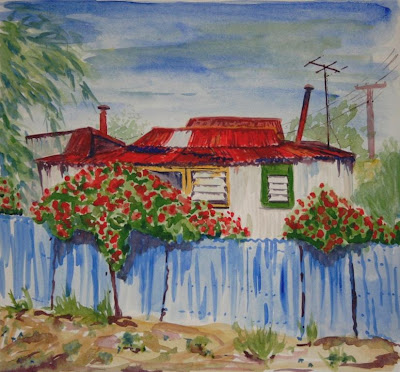 Cousin Mary and her Yamaha, last year
Koala and Homestead, Kalgoorlie, 1987, by Mary K. in Adelaide
… with just hours to spare before the snow came down, closing the airport for several hours.
Apart from during my recent damp visit to England I have seen nothing but snow for months, in Germany and in Norway, and sometimes it has been terribly cold (down to minus 20). Oh how at times I have longed for some warmth.

I have just received the following long email from my cousin Mary in Australia.

The heat has been tremendous over the past week. Constantly up in the 40C's. That's way past the 100F mark. Suffice to say Australia is struggling. Not just us in Adelaide but in Melbourne as well where they are dealing with terrible bushfires.

Of course, north of Adelaide where Greg and I live, it is always a couple of degrees hotter. So when they say it reached 44°C in Adelaide, it was 47 in Roseworthy, just 4 kilometres up the road from us. That extra 3 degrees sounds like nothing on paper, but believe me, it turns the earth into a scorching ball to live on. And I know that 47 degrees is measured in the shade!
The garden has been punished. Leaves are burnt, plants are wilting, fruit dropped, chickens panting, ground rock hard. Rabbits invading for food. Horses next door pushing over barriers to get at mulch and the chickens breaking through barriers to dig holes next to the irrigation systems in order to lie in damp dirt.

I'm struggling to save the garden but its taken its toll. I've made some makeshift shade barriers for the silverbeet and strawberries to just stop the leaves getting scorched. And it was hot sweaty work doing that I can tell you - I had my trusty fly net hat on and sunscreen, but the sweat was pouring off me. Rivulets - I could have watered the garden with my sweat!

I finished up work last Thursday for a 4 week break (and Greg). My only saving grace was that I was working in a lovely air conditioned office but when I walked out the front entrance, it was like stepping into a hot furnace.
We had rail lines buckling as much as 58 cm (I have never seen the steel look so much like spaghetti), we have had rolling blackouts with some suburbs out for more than 24 hours - food spoilt, people collapsing and some dying. We've had transformers catch fire because they can't cope with the high demand for electricity to supply houses running air conditioners 24/7.
There's been houses burning down because they are running air conditioners 24/7 and they aren't designed to run that length of time. There's even been an ambulance catch fire in the engine bay! So far, we have not been blacked out, but the electricity company is deliberately doing it to ration the power across the grid.
On my first day off - Friday - we took the car to a window tinting company and had them darkened as legally as possible. Cars without window tint in Australia makes no sense. They should make it a standard feature. But I also had a medical appointment Friday morning and as we had sort of double booked the car, I had to go on the bike. It was already something like 37 degrees at 8:30 a.m. as I rode the bike about half an hour down the freeway to my appointment. It was not so bad but I made the mistake of not sticking on my motorcycle boots which cover my legs all the way up to under my knees. The engine blast scorched my ankles as I was only wearing gym shoes and anklet socks. Yet I always say to Greg "I won't go riding the bike without my bike boots on!" for that very reason - the engine heat. So I must have had my common sense thrown out the window. Never mind - I survived the trip and got home unscathed except a bit hot and sweaty. Straight into the swimming pool.

As you can imagine, the only place is the swimming pool. That has been my refuge. Unfortunately the other effect of this heat is that animals and insects are seeking water. We have had swarms of bees coming around the pot plants, landing in the pool and anywhere where water is exposed, bees congregate in a scary swarming mass. Fortunately when the pool filter is running the bees do not try to land on the moving water, but when it is still in the early morning there are bees drowning and lots of bees to remove before I can get in.

A real nuisance they are. Greg got stung and is not happy because his hand is itchy and looks like a balloon.

Ahhhhh.....lovely! No motorbike riding right now! I've watched cricket, tennis, old movies, videos of motorcycle racing and Star Trek plus the news sixty times over - what else is there to do?

I just thought that I would share that on this bitterly cold day in Europe!
I certainly know which extreme I prefer. I find it far easier to put on layers of clothes to brave the cold outside, or to snuggle up under the bed clothes to warm up, than I do to cool off in the extreme heat.

There is a limit to how many layers one can remove, but even a bit of warmth would be welcomed here at the moment. Roll on the spring, which I actually caught a glimpse of on Friday in England where a few snowdrops and crocuses were tentatively poking their heads out in my Dad's garden.

I think I am more a winter, spring and autumn person but not only because of the temperature at these times of the year. As an artist the colours play such an important role and I so very much enjoy in winter how the light plays with the white landscape, producing the most unusual colours.

I have experienced 44°C in the shade in South Australia, in 1988, and there really is not much one can do except hose oneself down or stay indoors, get all the chores done in the night or early hours, and then keep cool!

So to Mary and my family out there in the heat of the Australian day "Take care and keep chilling out".