I speak “funny” in two languages 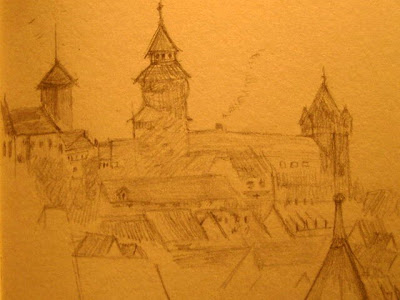 Nurnberg, New Year's Day 2008, by Susie Mallett
But not in my third!
English
I was brought up in Norfolk, real yokel country. I won’t describe my voice. Just let your imagination run wild.
The Singing Postman, remember him? Well he’s your man. I don’t look much like him but the voice is getting warmer!
At school our German French teacher’s ears were already hurting when he heard us speaking English, so you can imagine how awful we must have sounded when we attempted French...
A room full of Norfolk Dumplings trying to parlez Français, a disaster.
At art school in Surrey, where everyone even the milkman speaks posh, I was one of three students from a group of 50 who didn’t speak the Queen’s English, but instead had “funny” accents. The others were two guys, one from Stoke in the Potteries and the other from Swansea in South Wales. For some reason we all became good friends, and all three of us painted a bit “funny” too!
I have lived away from Norfolk for thirty-three years and for twenty of these years I have been living in another language. Interestingly, my Norfolk accent remains as strong as ever! It is recognisable anywhere as unmistakably that of a Norfolk Broad, as I discovered recently at Nürnberg Airport. It was recognised by a fellow traveller, a stranger, who it turns out lives only 500 yards from me in Nürnberg and was born in the same nursing home in Norwich as I was, just months before me!
It is a small world, made smaller by regional accent recognition.
German
I now live in Bavaria and many people have said to me over the years that I could not have picked a worse place to learn German. Germans tell me that I would have faired better if I had lived in Hanover, where they speak “proper”, or right up north on the East Friesian coast where the people are apparently nearly more English than the English. They also have a quaint tea-drinking ritual.
But I landed in Bavaria, where I acquired my second funny accent. With its very guttural sounds I imagine that it is probably similar to learning English in Scotland.
Here in Frankonia, a region of Bavaria, it is difficult to hear the difference between what they call hard or soft Ps and Ks. Words could begin with a P or a B, no one seems to know, or end with a K or G, also indistinguishable to a foreigner’s ear. This all adds up to me talking “funny” in German too.
I learnt to say Grüß Gott in a perfect Nürnberg accent very early on. This is a way of greeting people at any time of the day, and actually means “I bring you the greetings of God”. I have two problems with saying this. One is that I don’t actually bring anyone the greetings of God, I bring my own greetings, and the other is that if I say it in northern Germany they all think I should be locked up. There you just say “Good Morning”.
It is the same with the way in which the Bavarians tell the time. If I try teaching a child up north that it is three quarters to nine o’clock they will also look at me as if I am a raving loony. As they would in England too!
Someone has actually written a book Nämberch/English Spoken, full of English words that sound exactly like Nürnberg German when spoken.
A few years ago I visited the National Institute for Conductive Education in Birmingham where I met a Hungarian conductor speaking perfect English with a Magyar/Brummie accent. She told me that I was speaking English with a German accent!
I have since met many conductors speaking a second language, with both their own foreign accent and a local regional accent.
Do I speak funny in my third language, Hungarian?
No, I don’t think I do. It is the only language of the three I speak that I have had lessons in, lots of lessons for four years. I do not feel “funny” as I speak Hungarian, as I often do when I speak German. I obviously sound a bit “foreign”, but all the Hungarians I talk to tell me I speak their language nicely.
I have no other criterion to go by so I choose to believe them, as it is nice not to sound funny while speaking such a funny language!
Notes
Pam Ayres
http://en.wikipedia.org/wiki/Pam_Ayres
http://www.talking-book-store.com/title.aspx?titleId=979
click on “hear sample”
Worzel Gummidge
http://www.youtube.com/watch?v=knQBcO7_oNw&feature=related

The Norfolk Broads
http://www.visitnorfolk.co.uk/norfolk/norfolk-broads.aspx
'A Norfolk Broad'
'Broad' is a slang term for woman, usually considered derogatory. An example of a negative use of the word may be found in the song "Honey Bun" from the Rodgers and Hammerstein musical South Pacific.
East Fresian -
http://translate.google.co.uk/translate?hl=en&sl=de&u=http://de.wikipedia.org/wiki/Ostfriesen&ei=aFOdSYKPEI_m0AW-4-DcBQ&sa=X&oi=translate&resnum=4&ct=result&prev=/search%3Fq%3Dost%2Bfriesen%26hl%3Den%26rlz%3D1T4RNWN_enDE300DE301
The Bavarian language -
http://en.wikipedia.org/wiki/Austro-Bavarian
Nämberch/English Spoken - by Günther Stössel, ISBN 3-87191-136-4
http://de.wikipedia.org/wiki/G%C3%BCnter_St%C3%B6ssel
Brummie - A person from Birmingham, or the accent from Birmingham
Posted by Susie Mallett at 01:30