The return of the angels 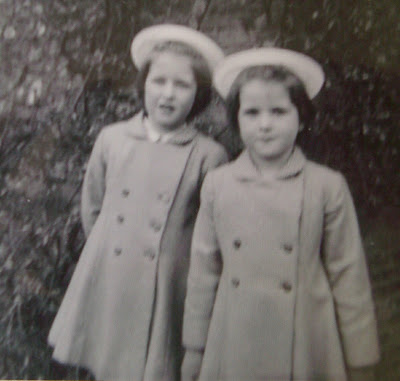 Angels? sisters and best friends, 1961 Norwich
Popper Péter wrote an article about Dr András Petö called Buddha in Budapest, in it he claims that Petö said that we all have an angel within us. I have written about it in my blog before, as has Andrew Sutton. We both mention the uncanny connection there seems to be between Petö and angels.
I discovered something new today, I discovered it quite by chance. I discovered that maybe Petö was not alone in his beliefs about angels.

It is a really cold, grey and dreary afternoon, even a few snow flakes have fallen, so instead of making a beeline from the tram stop straight home, I stopped off at the really good book shop at the top of my street to browse for a book I had read a review of recently. While paying for my purchase my eye was caught by a display of small chocolate bars with pictures of and quotes about angels on them. I was not attracted by them all just one in particular which said “Jeder Mensch hat seiner Engel, Rudolf Steiner” in English every person has their angel.

I have read the extract from the lecture which which Rudolf Steiner gave in 1918 in Zurich, from where the quotation on the chocolate bar comes. Reading it in context I think Steiner believed that the angel is something which influences us and not as I think Popper Péter meant which is that András Petö believed the angel within us has an influence on others.
Whatever it was they were both trying to tell us I will let you decide for yourselves. I just thought I would bring it to the attention of those interested that it appears that Dr András Petö was not the only one interested in angels, or writing and talking about angels, in German speaking Europe in the first half of the twentieth century.

Does anyone know of anymore early twentieth century angel fans?

Lecture by Rudolf Steiner, 9th October 1918 - The Work of Angels on Man’s Astral BodyTranslated by D. S. Osmond with the help of Owen Barfield
http://wn.rsarchive.org/Lectures/19181009p01.html
Posted by Susie Mallett at 16:25

Wer, wenn ich schriee, hörte mich denn
aus der Engel Ordnungen?
(Who, if I cried, would hear me
among the angelic orders)
- famous first line of poet Rainer Maria Rilke's Duineser Elegien(1912-1922). Rilke was a contemporary of Steiner's and heard him lecture. I think his angels are rather different, though, they represent some kind of sublime and are rather terrifying to mere mortals - worth reading the poems though, despite their difficulty! (Rilke was born in Prague in 1875, died in Switzerland 1926).

Hello Jo. Thanks for this comment I will read Rilke on my trip to Norwich. Will me be able to meet?
Susie