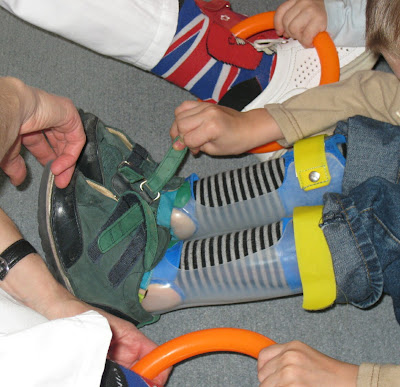 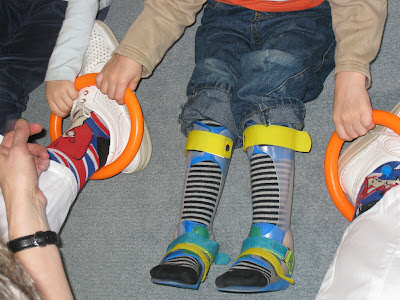 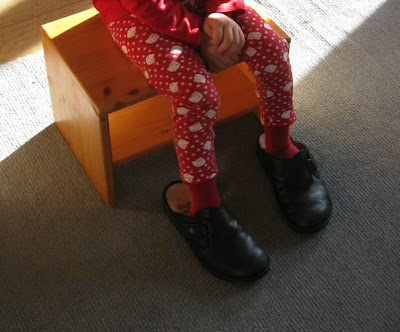 Petö was a person
I am back working with the little ones who have just had three more intensive blocks with us before they all head off to start school in the Autumn of this year. All of them have been with us since the parent-and- child group and are all active “Petö” children, as they call themselves.

Today we asked these children what Petö meant and one of them confidently replied “It is the work I do”. When my colleague went on to tell them about Dr. András Petö they were astounded to hear that Petö was in fact a person and that the name of their “work” is Konduktive Förderung.

I actually found it really refreshing to hear a child say that he was at work. Most of them think they are being sent to "therapy", as that is how their parents and nursery-school teachers describe it to them. As I have said before, I am also happy to hear Petö used to describe the work rather than "KF" (short for Konduktive Förderung).

I am working in this group with a very creative conductor, She is especially so when it comes to story-telling and creating situations in which the children become active, have a lot of fun and can be as independent as possible. She appears at just the right moment with plastic rings, boxes, sticks, anything that is hand really that can assist in making all our activities possible.

During the last block with these same children I was taking a “train” loaded with children from the wall bars to the table, all alone, one pushing me, one walking in front of me, while I was pushing a chair with two children sitting on it. This was quite a feat and my colleague ingeniously joined together the two children who were sitting chair with plastic rings around their shoulders, to prevent them sliding off! Yes we had quite a lot of fun again!

Today I had my creative colleague at my side again, once more plastic rings were doing the job to make sure that one little boy could sit up and take part actively in putting on his shoes without falling over (see first photo).

On another occasion (second photo) my colleague and I were not quick enough fetching boxes to put under the children’s feet so that they reached the ground. One little athetoid girl solved the problem for herself, much faster than we did. She wobbled around on her stool using her feet to bring a stray pair of sandals near enough to slip her feet inside. She was just having a bit of fun, and I bet she wished that they were high heels, but they just happened to be exactly the height that she needed to sit more securely while we played games with our arms, hands and feet.

The shoes were exactly the right height We probably didn’t have a box that size, sometimes children do know best , but shouldn't those shoes not have been on someone else’s feet?

Well that’s another story, conductors and their feet, another posting coming soon!

I enjoyed this posting, Susie, and can't wait to read a posting on 'Conductors feet'.