Back to the Fatal! 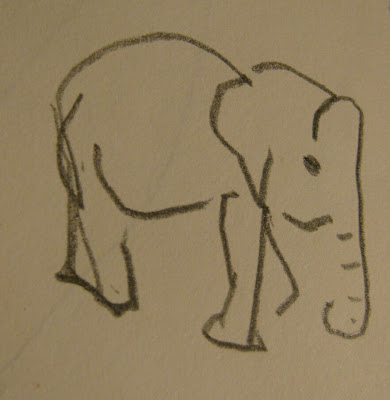 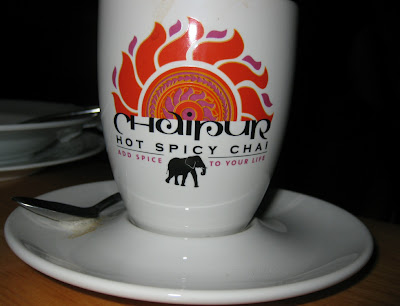 I’m back home. I was straight back at work just eight hours after landing so last night seemed to be the right time to get back out in the neighbourhood too. Time to stop unpacking, washing and ironing, blogging and preparing, and time to walk round the corner for a cup of something and some afters.
So with my notebook in one hand, and the newest Time magazine and some conductive reading in the other, I made my way to the Caffé Fatal for Quarkklößchen mit Zwetcshen Kompott (stewed plums with a kind of semolina topping) and Chai (spicey) tea.

Before I went out I had already decided that the elephant drawing that I had found in an old sketchbook was going to head this posting, so I was not in the least bit surprised to find another one on my tea cup.

What I was surprised to see was the notice on the door. The Caffé Fatal had decided to allow smoking after 22.00 hours. As a friend of mine says, despite the smoking ban working so well since it was implemented, even in Bavaria where they were having great difficulties deciding what to do when there is a beer festival in a tent, some people just can't let it stand, finding all kinds of ways round it.
The note on the café door says that anyone wanting to join the “After-ten club” must sign the list. Yes this is Germany, you must officially join a club to be able join the smokers. I am not quite sure how this works but I have heard of other bars and cafés bending the law in this way.
I am a very disappointed, as having found such a wonderful local I have enjoyed going there late in the evenings after finishing my work. Now I will have to take a break earlier if I want to enjoy relatively clear air, although the Cafe already smells different even at eight o'clock in the evening, as the smoke lingers from the night before.
It may be time to widen my horizons and check out the next street! I am actually spoilt for choice in this area of the city but the Fatal is near and nice.
Notes
Conductive reading -
Fachausschuss Konduktive Förderung (Hrsg.) Der Verlag selbstbestimmtes Leben, Eigenverlag des Bundesverband für Körper- und mehrfachbehinderte Menschen e.V., Dusseldorf http://www.bvkm.de/
Posted by Susie Mallett at 16:45