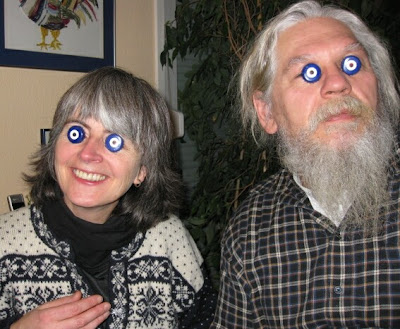 "Sitting targets" Susie and Joe having fun, January 2009
The step by step guide to making a lagerphone !

I decided that it was time for a bits-in-between evening.
My work had been cancelled again, due to sickness this time not finances. I spent hours on the phone instead, talking to parents and potential clients, but I still unexpectedly had the surprise present of the whole evening at home.

With my present of time I decided to make my friend Joe a present for his birthday. This is tomorrow, so I have to be quick.

At the birthday party of Joe’s wife, Geli, I had collected some really nice crown tops from lemonade bottles, and Joe was really curious as to what I was going to do with them. At the time I had no idea, I just liked them, just like I like lots of discarded things that I stuff into my already overfilled pockets to create something with at a later date.
Joe and I were quite creative with the bottle tops at the time, as you can see in the photo above. If I remember correctly we were working on a new style of contact lens!

A few days ago when I first got round to thinking about Joe’s birthday and what I should create for him, I came across just the thing, as he is a musician.

What Joe needed was a lagerphone!
This presented me with the ideal opportunity to get rid of some of my collected “rubbish”.

Yesterday on the way back from work I dropped in at the hardware store to buy my raw materials, a broom handle. This evening I dug out the hammer and nails and raided the shed, that is actually half of my enormous bathroom, for anything which makes a clang, including the crown bottle tops.

I had to get a move on because, unless you live in the middle of nowhere in Germany, loud noises after 8 pm are simply not allowed, so I had to be quick about making holes in everything which didn’t already have one.
I have a really heavy claw hammer that I was given on my twenty-first by my Dad, It had belonged to my Granddad and my Dad inscribed my name on it. My friends at the party thought I was quite mad for being so pleased at this present.
It was just the thing now for piercing the bottle tops with a nail.

My lagerphone is now looking and sounding quite good. I have a spiral of clangy things running down the broom handle with a leather grip in the middle, but because it is now long past the noise curfew hour I will have to finish it in the morning.
Not too early, as noise before 8am is also not allowed.
A picture of the finished product will follow shortly.
Note
Lagerphone
http://www.davidbruce.net/passions/224.asp
http://en.wikipedia.org/wiki/Monkey_stick
Posted by Susie Mallett at 22:32