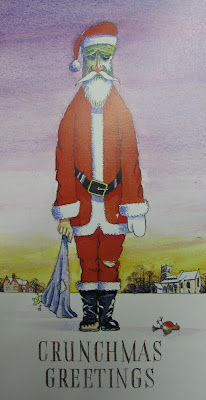 " My Dad's best Christmas card" by Eddy C., my mum's best school friend, 2008
Part I - The green and present land
I had been in England for but a few hours.
Despite still being very British after living "abroad" for 18 years I found myself asking a friend if I was perhaps getting just a little bit German, or at the very least getting used to German ways. Or could it be that I am getting out of touch with the changing British ways! Are the British no longer as British as I am!
I landed in England on a very wet Monday morning, I was incredibly tired, having travelled all through the night from the Tina Turner concert in Cologne, but still in a very jolly mood. I would have loved to have been sleeping on that bus to Norwich which I saw drawing away later than scheduled, disappearing into the distance as I emerged from the airport, but instead I had, I thought, a ninety-minute wait for the next one.
Waiting for trains, boats, planes, buses or trams is never a problem for me. I always have my sketch book in my pocket and I really enjoy "people-watching/sketching" over a cup of coffee. And, as I was now in the UK, I could even risk drinking a cup of tea. Take-away tea really should be avoided in most other countries.
My journey to the Tina Turner concert in Cologne, by train from southern to northern Germany, had been thwarted by bad weather (snow and a tempeature of minus 10-20°C) that had resulted in late and broken-down trains. I had still, however, arrived at my destination only one hour later than planned. Despite having to travel on four trains instead of two, at each station the connecting train was waiting on the neighbouring platform. I was once again impressed by the efficiency of DB, the Germany Railways network.
On returning to the bus station at the airport in UK, after a breakfast with lots of tea and some sketching, I was greeted by a humorous but cynical National Express inspector announcing "It is raining and it is Monday morning, which means chaos on the M25 and everything is late". Not just minutes late but up to two hours! He went on to explain to us would-be travellers that Britain’s drivers and its roads are unable to cope with wet Monday mornings.
I couldn’t believe what I was hearing, it was raining quite heavily but it was only water, not ice or 30 centimetres of snow. It is no wonder that the country comes to a total standstill when that water turns to snow, as it did just two weeks later minutes after my lucky escape.

I think we all went through (who comes from somwhere else) that kind of culture-schock you have written abouther in UK. Especially, if you were lucky to taste once the German standard of living quality.Obviously, you came to UK as a German resident. I met some German here in UK and guess what! none of them wanted to stay for long. But If they did they still would like to get home soon. I do not blame them, as you would not do, too. Germany is really outstanding to its residents in many ways and those residents have a unique basic requirement from life. However, if you did not live there for a longer period of time you might have not loved so much - many people believe Germany is "scary", people are strange and they live for themselves in a certain way.
The Fatal cigarette story made me smile! Join the Club! Smart idea ;)