Wii Research, the next episode 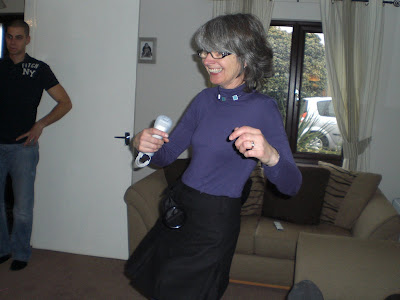 Yes I admit it, it was fun!
Of course I wasn't just having fun!
I have been sitting around in trains, boats and planes, in meetings, at lunches and in libraries for too long over the past few weeks. Now don't misunderstand me, I love travelling, I love meeting people and I love looking at books, but I do not enjoy the lack of physical exercise. The cold, damp weather has still not managed to entice me out on my bike, so when I received an invitation to visit friends on Sunday, who had got a Wii and accessories from Santa, I jumped at the chance. I was more than ready for some exercise.
This was, of course, all in the cause of research, not for fun at all, but from the shrieks of laughter that came from behind me as I practised, it was apparently a lot of fun for the audience.
This was only the second time that I had seen a Wii, and this one had even more controls and games, but I was less bewildered by the technical side and got on with the "research", much to everyone's amusement.
My friends have got the Wii Fit, the one thatI had suspected from my internet research would be the most suitable for my clients and exactly the programme that I am after.

I warmed up with Jogging, setting the speed of my pace-maker myself and speeding up as I got going. I surprised myself by even managing a sprint finish and a rerun! Then it was on to the Hula Hooping, which I think was one of the hardest of the many pogrammes, with the cordination of hip movement and balance taking a lot of concentration. As well as being one of the most difficult activityies I think that it was during the hula-hooping that I received the most laughs, but of course I was still only doing research!

While Hula Hooping and for rest of the programmes that I tried, I no longer had to hold the control panels in my hands as I had done while jogging. I now stood on the Wii Balance Board that comes with the Wii Fit programme. This is a slim white board that picks up signals indicating the weight-bearing and body positions of the player for whom it is programmed. Weight and height of each individual have to be entered into the computer.

I continued my Sunday morning research with Slalom Skiing and Ski Jumping, he two sports in which, I think, I found myself in most control of the machine through my body movements. The slalom was very sensitive to my body movement, and the transfer of weight and the jumping called for intense concentration on balance and on tensing and flexing many muscles.

All the time that I was "playing" I was visualising my individual clients and I was already working out how they might benefit from these programmes. I was wondering whether they would be able to sit in a chair, on a stool or in a wheelchair and still be able to participate, and I began to consider how I could facilitate so the majority could stand.

The Heading Footballs game frustrated me no end as I was distracted by being bombarded by flying football boots and panda's heads! All part of the game and it needed some getting used to. I am sure that the children will love it. The ability to keep one's balance while bending to the sides was really tested in this game.

The game that made me laugh the most was the Sliding Penguin that was supposed to catch flying fish. I laughed so much that my penguin spent most of his time in the water and probably went home very hungry, but it will prove a great success with my clients, I am sure.
Another of my favourites was the Balancing Snooker Tables, that leads through various levels of difficulty and calls for much concentration.

I finished off my Sunday sport research session by sitting crossed-legged on the Wii Balance Board concentrating on keeping my body calm, still and balanced. To help this concentration I watched a candle on the TV screen that took three minutes to burn out. The perfect ending to an hour of strenuous, fun research.

What had I learnt?
I tried each of the games/sports several times and even in this short time I realised that this Wii Fit is good not only for physical fitness and training but very good also for mental training, eye-hand coordination, concentration, cognitive skills and much, much more. I improved on all the programmes very quickly, partly as I got to know the "rules" but also as I started to feel what my body was doing. Particularly in the Ski Jumping, I was aware of every muscle in my body, in the Hula Hooping I found that my co-ordination skills are somewhat wanting and in the Snooker Table Game I realised that my eye coordination in relation to my body movements is probably quite good.

I tested some of the "sports" in sitting positions. I now need to do actual practical trials with my clients and I am now even more excited than I was before at getting on with the project, knowing there is probably something here for everyone to use in some way. Although Wii states that most of the programmes are for improving balance and coordination skills I think this would be just is the tip of an iceberg. The whole body is involved along with the mind, and from the laughter from the audience today I think there is already an indication that the conductive collective soul will also be participating.

During the past twenty years in which I have been involved in conductive upbringing, I have seen how conductors can be tempted into using all sorts of bits and pieces and ideas, as time-fillers.

When introducing Wii (and beyond) it will be extremely important to think about it distinctly as a leisure activity, which is my initial project, or as an integral part of a conductive programme, in which case it should serve as a conductive tool , and simply as an amusement or a time-filler. This is why I have found it so important to begin to get to know the different programmes that Wii offers, so that when I am with my clients I can observe and talk with them about their needs and quickly find, and possibly adapt, the programme to suit each individual.

"wii fit" AND "therapy" from Google

Earlier today I googled "wii fit" AND "therapy" and came up with many sites in which therapists and clients describe the results of their own projects. A few of these links I will list below, leave you to form your own opinions and maybe check some more.

I was surprised at the number of different uses that Wii Fit and Wii Sport has already been put to, including rehabilitation programmes for positional vertigo, stroke, cerebral palsy, prosthetic limbs and post-achilles-tendon operations.

Reading some of the clients' reports, I was reminded of what one of my teenage clients with cerebral palsy said to me when she first started to take part in biofeedback therapy. She was so pleased to see what she was trying to do with her body illustrated on the computer screen n which she was receiving feedback on whether she was using the correct muscles and movements. Wii cmight offer some of my clients similar feedback, and give them useful information about their bodies.