Pädagogik or Arbeiter, that is the question? 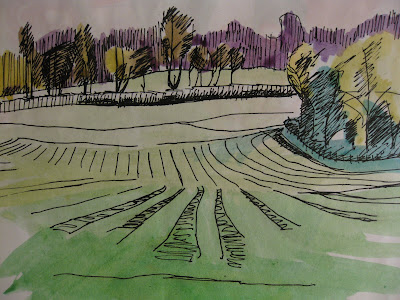 "England, green and pleasant" from my Sketch book 1976

I was surprised to read on Andrew Sutton’s blog that people in England think there is something new about social pedagogues, when everyone in Germany just takes them for granted. As I have said before, we take a lot of things for granted in "Europe", and perhaps in Germany especially, that unfortunately they don’t have in England.

In Germany you hear both the terms "social worker" (Arbeiter) and social pedagogue (Socialpädagogik). The second of these is not to be confused with the Diplom. Pädagoge, someone entirely different who deals with the more theoretical, academic side of things and probably ends up teaching at the university, or maybe as the boss of both social workers and social pedagogues.

Many of my German family and their friends are social workers, so I made a quick phone call to find out the difference between social workers and social pedagogues. The answer: “very little”.

When they did their training, in the early eighties, they all studied for eight semesters (four years) at the polytechnic. This was basically the same for both professions, all students followed the same course but there were four relatively small modules covering different areas in which one could specialise. Two of these areas would be for social workers and two for social pedagogues. For example, work in rehabilitation and resocialisation, in the Salvation Army, in psychiatric hospitals or in prisons, would be the job of a social worker. Working in family therapy or in children’s homes would be the job of a social pedagogue. Just like doctors, choose a specialist area to work in, so did the student social workers/pedagogues.

I myself had never been able to tell the difference between these two professions in all the time that I have been living here, so I was pleased finally to have cleared it up!

Things are never that simple!

As all these people I asked are round about the same age as I am, I decided that it might be best to check out whether their information was up to date. I soon discovered that in Germany social pedagogues don’t actually exist anymore!

Since the 1990s there had been the general term "social work", covering both Sozialpädagogik and Sozialarbeit. As a result of the Bologna Process the traditional qualifications of Diplomsozialpädagoge (FH) and Diplomsozialarbeiter (FH) have been replaced by the Bachelor’s degree in social work, qualifying you as a Sozialarbeiter/in (BA). This is the same Bologna Process that has ended the training of "conductor-teachers" at the Peto Institute and replaced it with the new BA in conductor-training.

Add to this the fact that every state in Germany has its own content of training for social workers, although they do try to standardise the courses throughout the country and internationally.

After that piece of “research” I am now left asking these two questions:

Who or what is it that the people in England are expecting to answer their advertisements?

What is going to be taught to the 200 staff from the children’s homes in Essex?