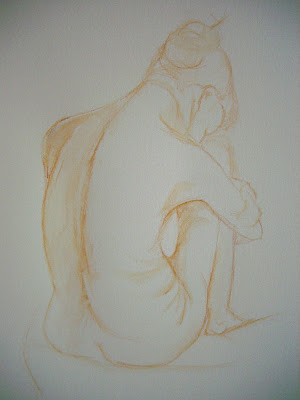 Yesterday I received some treatment for my back. All conductors should give their backs a treat at least once a month, if not once a week, as prevention rather than as an attempted cure as it was for me. Swimming, training at the gym, a gentle massage, anything which helps to take away the strain on the back.

I have had an aching back on and off since last June, when I was helping my Mum get comfortable in her hospital bed and something went click. The aches and pains come and go but this week they just would not go, despite having a Tens machine strapped to my back all week.

I decided that it was time to do something good for myself, treat myself a bit better than I usually do, so I took myself off to my GP, thinking that he would refer me to a physiotherapist. But no, he sent me downstairs to the stretching table!
Upside down
For a start he very gently manipulated my spine, bending my legs and pressing my shoulders until I felt something move back to where it should be. Then he surprised me by offering me a go on the table which turns one upside down! He began by fixing my feet as tightly as he could without breaking them, then he turned me and the table through 180 degrees so that I hung there, my outstretched finger tips almost touching the floor below my head. There I stayed for 60 seconds. The time will increase by one minute each session. The doctor was hoping that my spine would stretch and thereby any trapped nerves would be released. I am still waiting to find out whether it worked, it certainly felt good.
I came out of the surgery walking an inch taller and, as the evening went on, I ached all over, feeling as if I had survived ten rounds in the ring with Henry Cooper. The back pain appears to have eased off now, but every muscle in my body, right down to my finger tips, has come to life.
They all ache, but I am still walking tall.

Prevention is far better than cure

Maybe preventive exercising, massage, muscle-training etc. should be part of the contract that a conductor signs when she begins a new job. I know that there are some centres here in Germany, where massage and manipulation are available to the staff, sometimes on site, often free of charge. I have also heard that not many conductors take up the offer. This surprises me.
Conductors, whatever kind of therapy is on offer to keep the body healthy, please do make use of it. Try to prevent the backache rather than try to cure it later. The pain never really goes away once it is there.
I am off to the surgery again next week to be hung upside down by my feet after work, then on to the swimming pool.

Notes
Tens
From Wikipedia - "Electrical stimulation for pain control was used in ancient Greece, 63 A.D. It was reported by Scribonius Largus that pain was relieved by standing on an electrical fish at the seashore. In the 16th through the 18th century various electrostatic devices were used for headache and other pains". I use my Tens for all sorts of muscular/skeletal pain and have also found that it is the fastest and best remedy for migraine.
http://en.wikipedia.org/wiki/Transcutaneous_Electrical_Nerve_Stimulator
Henry Cooper
"our 'Enry"
http://en.wikipedia.org/wiki/Henry_Cooper_(boxer)
PS
At home we have an amazing machine, the like of which I have also seen in the Norwich Castle Museum. In a small wooden box is all the technical stuff, that I assume works something like a dynamo,and on the outside of the box is a handle to turn. The faster that the handle is turned the stronger is the current that passes through the cables to the two metal rods that one holds, one in each hand.
This machine always came out at Christmas time, in the bar of my Grandad's pub. We would all stand in a circle holding hands and I remember screaming for my Grandad to turn the handle faster and faster because I loved the tingly feeling. The more people in the circle then the faster he had to turn, otherwise we wouldn't feel anything.
In the Norwich Museum the label informed me that these boxes were used in the treatment of rheumatism. Can anyone tell me any more about them? The nearest that I have found in Google is below, but it differs from Grandad's. His doesn't have pads like the modern Tens, as this one does, but metal rods to hold.
http://www.thebakken.org/artifacts/database/artifact.asp?type=category&category=E4&offset=30&id=379
Posted by Susie Mallett at 15:10