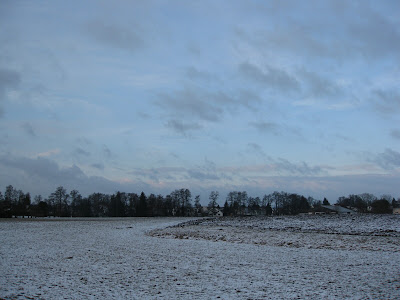 Early this morning in Großgrundlach, by Susie Mallett 11th February 2009

I found this lost posting, Tag der Deutschen Einheit, while I was searching this evening for something in my earlier blog postings. It was written on 3rd October 2008 and I must have just forgotton to press the button, because it was still lying there as a draft, waiting patiently to be posted and read.

Is it ever too late or too early to learn?

If you Google Tag Der Deutschen Einheit, or look up the references in my notes below, you will read how the new, united Germany is still learning.
On Tuesday morning I was with a stroke patient in her home, so that we could work on problem-solving in her own familiar surroundings, and in the evening I was with my wonderful Workers Group" that I have mentioned before, in my posting “Conductive cooking”. Together they handed me the second of the blogs on a plate!
It is now almost thirteen years since Waltraud had her stroke and we have worked together now for ten of these years. Here she was on Tuesday explaining to me what it was that she wanted to learn next.
Over the years since the stroke Waltraud has become gradually more aware of her body, its position in space and of her movements, and she has learnt to decide for herself which are the “good” and which are the “bad” movements as she calls them. She can also now work out what she needs to learn to continue progressing, and relate this to me.
She knows the questions to ask, she is active in finding solutions and a very highly motivated lady who is determined to learn something new every day, an example to us all. We had a good go at solving the problem that she had chosen to tackle in that session, she gave herself homework until we meet again, then we came slowly to a close,the time when we always sing.
Waltraud has a perfect musical ear, something that she has retained since the stroke. She remembers the tunes of many musical pieces. She “lost” all the words, though slowly through years of our practising they begin toreturn to her.
Learning together, teaching each other
Today it was to be Mozart’s Ave Verum Corpus. I know this from school, so I could make a good attempt at singing it, but if I hadn’t known it Waltraud would have taught me as she is a very good, patient teacher!
Here we both were, Waltraud learning new movements years after the stroke and me at 50-plus, learning to sing. It was at this point that my brain starting ticking and I asked myself. "Is early learning necessarily better? Could Waltraud have learnt today’s movements years ago? Could I have learnt to sing?"
Is it really the case of "the earlier the better" as I wrote about in a recent posting, “From the very start of life: pessimism or optimism”? 29th September 2008? Not with my singing it isn’t, I was always too shy. I couldn’t have learnt to sing now without all the previous steps to get me there, just as Waltraud couldn’t have learnt what she learnt today without having first learned to solve problems through conductive rehabilitation
Readiness to learn
And what about those children with cerebralpalsy, who start early with a conductive upbringing, only to give up in adolescence, and then return to it again as adults? Why does this happen? Is it too early at 14 to begin the next stage, are they just not ready, not mature enough yet to take over responsibility for their own lives?
I saw this occurring in Budapest at the Petö Institute and I have now been in Germany long enough to see it happening here. After this Tuesday morning with the stroke client I had Tuesday evening with the “workers”. Almost ten years ago now, one of that group had been in my giggling teenage group. This young lady is now in her mid-twenties and recently approached me wishing to start Conductive Education again. She is now prepared to take responsibility for her own independent living. She is lucky for she still has Conductive Education on her doorstep, and she joined our growing group.
When I was in Budapest in April of this year I met an 82-year old lady who had given up Conductive Education as a teenager but returned to the “after-work group” as a thirty-year-old when she had a problem which she knew could be solved solely on the basis of her conductive upbringing. She is still taking part in Conductive Education sessions.
Steps and spirals
My clients have made it quite clear to me that it is never to late to learn. I learn from them each moment that I am with them and they all learn from each other.
Even the clients I visit at home learn from what I learn in a group.
My clients have shown me that sometimes in conductive upbringing or rehabilitation it can be too early to learn. The process has to progress one step at a time and we learn through everything and everyone influencing everything and everyone. If the moment not right then we take a different step, we sing a different song, until we find the way and the upward spiral can continue.
This is why my door is always open to those teenagers who went off on a different journey to discover their adult selves and who return to Conductive Education later, after taking over responsibility for their own lives from their parents, and deciding that it is never too late to learn!
Notes
Tag der Deutschen Einheit - German Unity Day
http://en.wikipedia.org/wiki/German_Unity_Day
http://www.lpb-bw.de/geschichte/Tag_der_deutschen_Einheit.php
Conductive cooking
http://konduktorin.blogspot.com/2008/03/conductive-cooking-i-dont-only-call.html
From the very start of life: pessimism or optimism
http://konduktorin.blogspot.com/2008/09/from-very-start-of-life-pessimism-or.html
Ave verum corpus
http://en.wikipedia.org/wiki/Ave_verum_corpus
Posted by Susie Mallett at 19:32