Something from my collection of bits-and-pieces 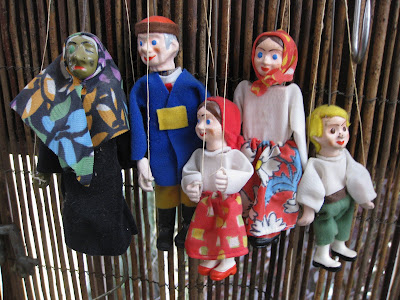 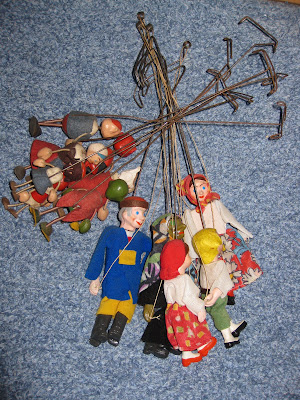 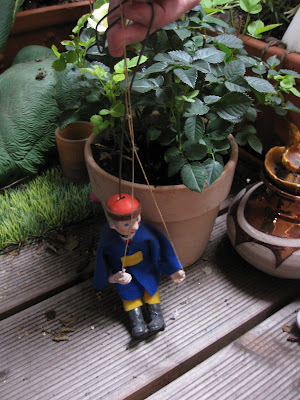 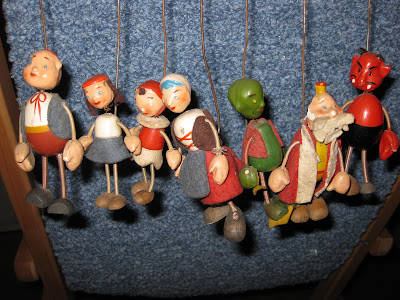 "My collection of puppets from Ecseri piac, Budapest"

Does anyone know anything about these puppets?

One set is more recent than the others but all probably characters for acting out the same story. There is a mother and a father in each set, two children, a boy and a girl, and a green “person”. In the older set there is also a Saint Nicholas and a devil, in Hungarian: Krampusz and in German: Krampus.

Can anyone tell me about the green person?

Is it Knecht Ruprecht? That character, first mentioned in a story about Nürnberg from the 17th century, has been referred to by Grimm as Robin Goodfellow, a sprite who could quite possibly be green. Or is it the Pelznikel who sometimes appears wearing a mask and dressed as a woman? Or a Wichtel, or a wight, a hob, a leprechaun or a nisse? All dwarf-like creatures from various countries, some, like those from Ireland and Sweden, often depicted as being green.

I am only guessing now, from snippets that I have read here and there, and as we know in the CE world it is not a very good idea to guess, because we usually tend to come up with at least ten when adding only two and two!

I have absolutely no idea who the green character is and would love to find out. So if anyone recognises the green person in these two sets of puppets, or knows anything else about them please let me know.