Inclusion within a conductive upbringing 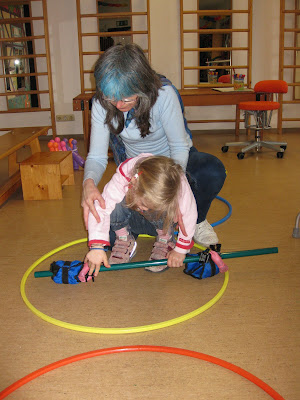 "Learning how to bear weights!"

A visit to school

What a difference a year makes

That year has made all the difference in Littlie’s class with her role changing from her being something out of the ordinary, someone special, to becoming just an ordinary member of the group.

I was so pleasantly surprised when I visited Littlie’s class today to see that she was one of the girls playing tag, one of the children who was called upon to demonstrate the behaviour of a car on a pedestrian crossing just like the other children were, and when she put up her hand to answer a question the other children were there ready to help pad out the correct answer with a few more words without a blink of an eye. All so discretely managed by her wonderful teacher and her integration-assistant.

My visits to this class this year have, all but one, been outside school time, meeting with the integration-assistant when lessons were over, to take a look together at seating arrangements, learning how to climb the stairs to the art room, checking the computer keyboard and its use, and other requests. All were things that took time that would not have been available to us during the lessons, so we did it after school; this meant that I had not seen the class dynamics in action for a long time.

Today was my last chance to see the class as a whole before the summer holiday starts. Next school year brings a longer day with lessons continuing until one o’clock instead of eleven thirty. There will be a new class teacher and a new classroom in the main building of the school. I will be there as soon as I can in September to meet the teacher and see what help we can give during this next transition. I am very pleased that the integration-assistant remains, for a third year running, the same lovely lady.

Hand-in-hand with all her classmates of course!

After seeing the children working so well together in Mathematics and German I was invited to join in for sport.

In sport Littlie has learnt lots of tricks and alternative “rules” that she can use so that she is able to join in. Her assistant has done a good job in making her feel really at ease and part of the lesson. The teacher played many games that Littlie could join in with and once again I noticed that she is not made a fuss of, the class just get on with it around her and with her being as helpful as they can but not over-fussy.

One of the best instances of this togetherness and probably, from the looks on the children’s faces, the most enjoyable for all was the elephant game. Littlie was the head-of-the-herd with her rolator and all the others packed their trunks, hand between legs to catch the trunk behind, and off they went to the circus, with the teacher giving directions for the route to be taken: turn left, stop, turn right, stop, turn round, etc.

Having such a severely physically-disabled child in the class is not easy for the teacher I know, but she has made it easy for everyone involved, including me.

One of the reasons for my visit yesterday was to thank the pupils in the class and teacher once more for being a key person in Littlie’s team, and for being such a major influence in making it such a success of the first two years in mainstream school, with the rest of the team working closely together.