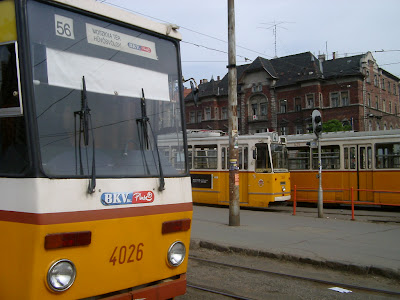 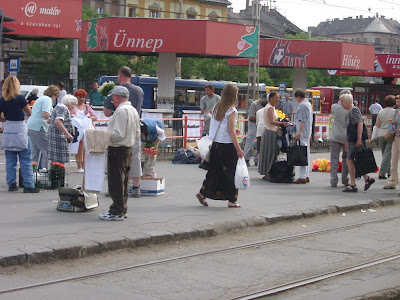 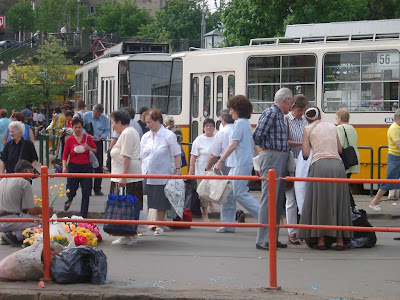 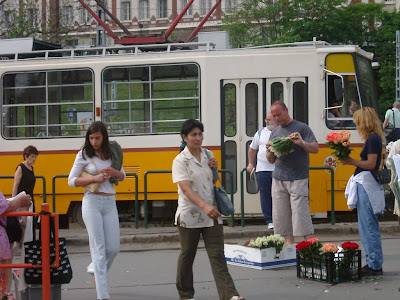 
I tried to post this on Andrew’s latest about his Moszkva tér:

but I had no luck.

Then I sent it to Andrew for him to post there himself, but now I have it back again and will make a final attempt to post it is here on my own blog. Fingers crossed!

Almost everywhere I walk in Budapest I am reminded of something that I have read about dreadful happenings in the city. Despite this I also have some long-lasting memories of my own experiences in the city of Budapest. I lived near to the Petö Institute so I crossed through Moszkva tér whenever I went into the city centre. I was surprised and also reassured on my last visit in 2009 to find every crack in the pavement and each pothole still there in the same place in the area around the Metro entrance and the clock.

My own memories also include:

The brilliant book stall that saw many of my forints, and still does when I am there

The clock under which I always meet my Hungarian friends:

The people from Transylvania selling their wares on the far side of the square, separate from the “tessék-ladies” (with the flowers)

The flower shop near the Metro entrance

The mushroom-checking station with its long, long queues on a Monday morning

The Knights of St John of Malta centre

The first arrival of the pink Barbie-doll tram

Grey-ness, busy-ness, tired-ness, but life as it really was and is

Young students shaking hands and kissing as they met each other or said their goodbyes, something that we Brits were not used to, though I believe that this has become more usual in British youth-culture over the past twenty years

Bablevés in the Gösser Pince, I think this is the cellar bar that Andrew mentioned, where I used to go with one particular Hungarian friend after a long day at the Institute

The flower market, a blast of colour on a drab rainy day

Moszkva tér is the place where a Hungarian conductor taught me how to get on a 49 tram during the rush hour. She told me: “This is no place for English queues, here you need to use your elbows!” She demonstrated how to lift the elbows so they stuck out sideways like a chicken’s wings. This ensured that I was not shoved out of the way while entering the crowded tram. When I looked I realized that all the elderly ladies, laden with shopping bags, really were standing there waiting with chicken-wing elbows at the ready! I soon discovered that my pointy elbows were rather good at fending people off. I still prefer the English queuing system, though.

The jobs-worth cashiers at the Metro ticket office who suddenly changed in the mid-2000s to helpful English-speaking sales people. I still have my blue student ticket from 1989 that cost under 100 forints for the month.

Here are a few of the many You Tube and website results that I found after Googling Moszkva tér!

The song that my colleagues often sing-

Learn about the transport system from Moszkva tér

Activities in the square:

There is a film in nine parts on you tube, called Moszkva tér, the epilogue has a nice shot of the square from above:

The tone of mine was perhaps over-elegiac, times passed Yours is more about living and life, and life goes on.