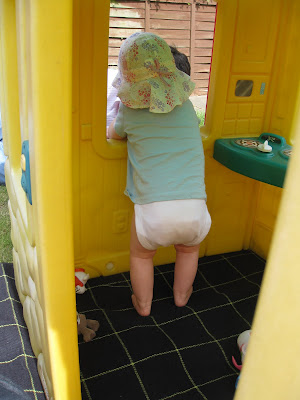 Conductive work is really hard, not only for clients and their families but for all who are involved, conductors too.

Little Princess was dripping with perspiration and outside the next summer-storm was building up as the skies darkened and the temperature reached the high twenties. But we were both really happy and smiling as we worked so very hard in what was the second shift for us both. School had been really busy for Littlie this morning and I had been working with the Kindergarten children who are sometimes quite a handful.

After Littlie's group had eaten lunch and we had all played a game of memory together we got on with some fun and games, walking through ladders and over obstacles, and then at last on to the blue mat that gives Littlie so much confidence when she walks as it is a bit softer than the floor.

Little Princess is bounding with energy these days. She eats like a horse, walks hand in hand with her friends at school or pushes her wheelchair to the classroom from the car. She comes into group announcing that she will go to the bathroom to wash her hands instead of doing it at the table. If we are not available to walk with her after lunch she simply kicks away her foot rest and pushes herself backwards on her stool, moving across the room in this way to wherever it is she wants to go.

There is something else that is giving her lots of strength at this moment. This is time spent with her family, she had a two week holiday and now her Mum has three months' leave. Mum is there at home waiting at the door each evening with a “cocktail”, as she calls it, when Littlie completes her long walk home. I can always see a huge difference in the children’s personalities, their behaviour and abilities when there has been a school holiday, and Littlie is no exception. Littlie’s athetoid body behaves so differently for her when she returns to us after a family holiday and since the Whitsun holiday that finished two weeks ago the improvements have remained. She is so relaxed and motivated and always has a smile on her face. I am sure that she can thank Mum for this. Granddad put it down to "daughter-love" when he asked me today why she is doing so well.

What was it that gave us and Opa so much joy this afternoon?

As Little Princess stepped on to our super blue-mat that is sometimes a swimming pool, sometimes a bowling-alley and sometimes a catwalk, like it was today, she half-turned to me and quietly announced to me:

“I believe that I will soon be able to walk alone!”

She is just eight years old, this little girl, and she knows her body better than anyone does. She can feel in her body what Évi and I have been feeling for several weeks now when we work with her.

This little girl has gradually been giving us the feeling that she is going not only to hop off her stool and stand up at the table as she is now doing every day, but as we look in amazement we think that she is going to walk off on her own too. She really wants to do it.

After making this announcement she went onto walk first three, then four, then as many as eight steps alone. On one occasion when she lost her balance and lowered herself to her and knees (she does not fall any more) she asked:

I replied “Of course you will.”

The cheeky face turned to me with a grin and asked: “How?

So I showed her and on the second attempt she nearly did it herself.

Today was "learning to use the bus with the wheelchair" day, so Granddad came to collect school-bags and wheelchair that were now with us so that Littlie could walk home. When he arrived we put the mat in the hall so Littlie could walk towards him at the door. Granddad had tears in his eyes as Littlie achieved her best walk of the day. When she got to the last metre of mat he walked forwards to take both of her hands gently in his own in order to experience those last few steps with her. She carried on walking forwards; she did not fall into his arms as she would have done a few weeks ago.

That made all our hard work, the hard work from all of us including Granddad, so worthwhile. And there was more to come. Granddad asked me why I thought that his Little Princess is doing so well these days. I told him what I thought a combination of all sorts of things as I mentioned above; family attention, eating lots, strength of body and mind, motivation, lots of friends plus the will to succeed. It was at this point that Granddad added "daughter-love".

AP would have approved of what Granddad said just as much as I did, and I told Granddad that I believed that he is right.