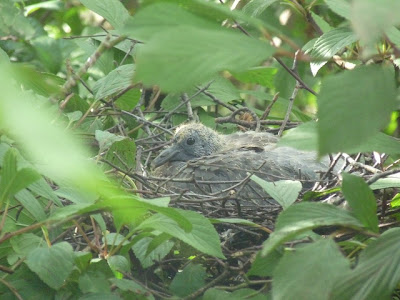 It has been a lonely week

I got up on Monday morning to discover that the nest was empty and no sign of Mum, Dad, or offspring, neither in the tree nor on the ground.

I hope that the torrential rain of the night before had had no influence on my tree and surrounding being deserted. Birdie was already far too big to sit in the nest the last time I saw him when he had perched on the side of it next to his parent. I like to believe that he flew the nest and was not blown out by the gale force winds and lightning cracks that caused trees to fall in the neighbourhood.

It has been strange not having a conversation on the balcony before work each morning or a last peak before bed.

My friend sent me a text mid-week informing me that his wood pigeon has also left home, but has however not yet strayed far from the nest. They meet regularly on the back doorstep on under the neighbour’s hedge as baby-bird is still feeding on the ground. After several rescues from the claws of cats at the beginning of the week that wood pigeon is now big enough to defend himself from cats but probably not from foxes.

I have no idea what happened to my collared dove. I hope that he flew from the nest and has not been hopping around the busy city streets all week with not only streetwise cats to contend with but with cars and delivery trucks as enemies too.