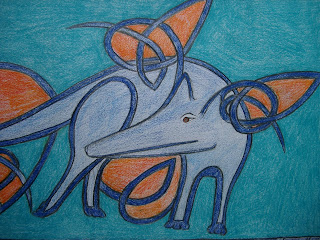 "Dream Dog" by Susie Mallett 2004
Cheetahs
"Cheetahs" is the name given to the springs that amputee athletes strap on when they compete in sprint races.


With the London Olympic Games looming up in the not-so-distant future, with tickets for events being controversially distributed, buildings being prepared and athletes in training, there is no shortage of spectacular stories for the media to use as headlines, but for me this one comes out on top:


Oscar Pistorius from South Africa has managed to complete a run in a 400 metres event in a time that qualifies him, if selected by his country, to run in the London Olympics!


But, even if selected by his country, will he be running in both the Olympics and Paralympics in London?


I read in the Telegraph that Natalie Du Toit, of South Africa, a swimmer and single amputee, and Natalia Partyka, table tennis player from Poland, born with one arm ending just below her elbow, competed at both the Olympic and Paralympic Games in Beijing.