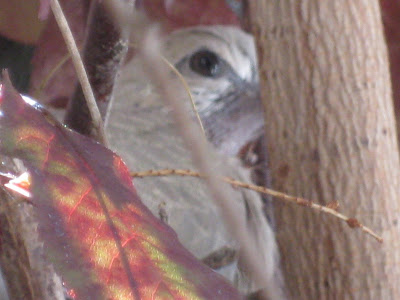 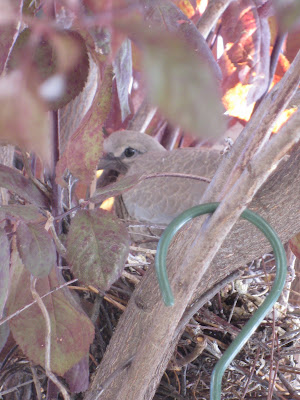 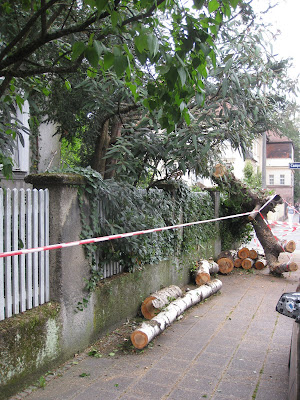 I received a text message on my mobile phone last Sunday telling a great deal in just one word: “Hatched”.

The wood-pigeons nesting outside my friend’s window in Surrey have incubated their eggs long enough, so now there should have been some activity for him to observe - comings and goings, gaping mouths and wiggly worms, but there was none of this. Baby-pigeons by-the-way do not eat worms.

I also received a photograph by email that unfortunately will not reproduce here, and then nothing more until mid-week when I received another text telling me that baby-bird is huge!

On Tuesday morning, when I took a look at my own lodgers before I left for work, I was quite optimistic that our numbers had increased too as the nest was empty. I thought that my parent-birds must be off finding food. Before I hoped onto my bike in the drizzle, Mum, or perhaps Dad, had returned and snuggled down on the nest and I still had no idea if there was a baby or two there or not.

There was some movement again that afternoon but by this evening all were snuggled down again and there was not a cheep or a chirp to be heard.

Now I realize that all the time my baby was there too and because both my Surrey friend and I have got only-children as lodgers all is quiet and peaceful in our respective trees.

On Wednesday here on the home front I could see, above the rim of the nest, the top of a ball of shivering fluff. This fluff has quickly changed from fluff to feathers and today the ball is actually walking around on the very precarious nest and it has now taken on the appearance of a baby collared dove without a collar.

I have not seen head or tail of the parents all day but someone must be feeding this baby, and it is not me, as it too is HUGE!

My friend reports that his home is as peaceful as mine, we had both expected a bit of a hullabaloo, just as there always is when a nest full of swallows hatches, but pigeons and doves take things as relaxed as their cooing.

As we both have only one baby in our nests there is no competition and therefore no cheeping to attract the attention of the adult-bird to get some food. Pigeons and doves regurgitate food for their babies, it is like milk, and as far as I can tell the babies do not feed constantly. My poor might seems to be on his own most of the day fending for himself and getting quite worried when I step out onto my balcony or climb up on a chair to take a photograph. Baby’s parents were quite used to me being out there exchanging a few words a couple of times a day, but baby is slowly beginning to learn that I am only the photographer and will do no harm.

I have been at home all day today so each time I have heard that patient cooing I have looked out of the door to see if I can witness a feed, but I still have not seen Mum or Dad. I heard from my friend that at least one of his wood-pigeons in Surrey hangs around in the tree all day long, keeping an eye on their offspring. I can hear from the cooing at this very moment that my doves are about somewhere but they are very well camouflaged I still cannot see them. I hope that they will keep a watchful eye out as the thunder rolls in the distance and the skies blacken. I fear that we are in for another storm like Friday’s that shook my baby in his nest and brought down a tree in a garden two blocks away. I hope that there were no babies in nests in that tree!

I will feel quite lonely when my fluffy bird fledges and leaves the nest; I think that there are only a few days left to take photographs.

I left my camera at work on Friday evening

As I knew that there would be some activity on my nest this weekend I set the alarm to get up at 6.30 am on Saturday morning. By seven I was on my bike to cycle the ten kilometers to fetch the camera. On route I met a weasel that crossed my path at high speed, and two enormous yellow bulls who were still dozing in a meadow. I had a coffee and a brioche before making the return ten kilometer trip, making the round trip in just over an hour. It was really peaceful cycling at that time of the day especially so on a Saturday. It was a pleasure just to ride my bike for the fun of it with no work at the end of the ride!

This evening’s storm got going and as I write one parent-bird has appeared to stand guard beside the nest. What an independent creature this little dove is! Not like me with my Mum in a storm. She would sit and cuddle me in the dark on the bottom step of the stairs until the summer storm passed us by. And our raspberry jam that we were always cooking at the time, bubbled either too long or not long enough and would set too hard or not at all.