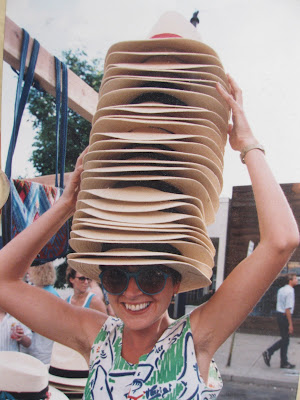 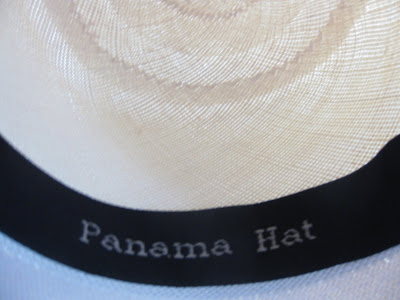 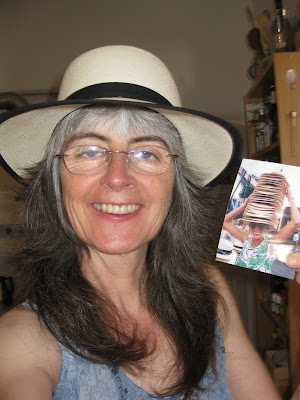 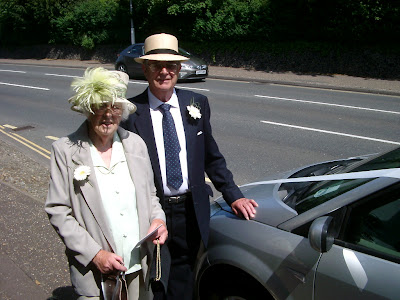 I have always dreamed of owning a Panama hat

So when one day late in June my friend Geli and I took a trip to the Hat Museum, before sitting in a café for coffee and cakes, I treated myself to one.

It was quite a difficult feat as there were literally hundreds to choice from. There were none like the one that I have always dreamed of owning, with a weave so fine that you can roll it into a tube to transport it. A hat in a tube would be ideal for me so when I am on my bike, always with a helmet on, I would be able to unroll it and wear it whenever I reached my destination.

It was fortunate for my purse there were none like this available, in fact the man said that they do not exist. I did not argue with him although I know they exist as I have seen one at a car-boot sale and actually unrolled it and tried it on. These finely woven, rollable Panamas are very expensive, at least five times the price that I paid for mine, and even with a part of mine a present from my friend, a rolled Panama is way beyond my purchasing powers. The on I have is fine enough not to lose its shape if I bend it a bit in my panniers.

My Dad wears a Panama, as do most of the men in England who I know. I saw many Panamas on show when I watched the Paris Open tennis tournament on TV with my Dad and I am sure they were out again at Wimbledon, Henley and all the other British Summer events. I was very determined that this summer I would at last have one of my own.

I wore my new hat for the whole weekend after I had bought it, even in the flat, but ever since then it has been raining! I eventually got it out again yesterday while walking around town and I felt like the bees-knees.

The picture of me above, with the hats piled high on my head, was taken in 1988 in Denver, Colorado. I was with a photographer friend at a street party to celebrate the first day of summer. I did not buy one of them, but I still have the trilby that I bought a few days later. The other picture of me was taken today with the new hat perched on my head!

Another picture is of my Mum and Dad on the way to my nephew’s wedding. My Dad had told his Grandson that he would wear a hat and everyone was afraid it would be one of his many flat caps. We were relieved to see it was the Panama and everybody thought that they looked a stunning pair.