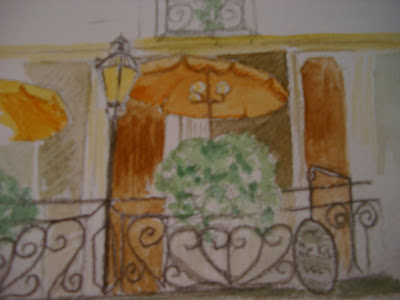 "Social occasion in Paris", June 2006, by Susie Mallett
A Grand day out!
A few days ago I received a mail from the lady who runs the charity that I work for, the Verein für Menschen mit Körperbehinderungen e.V.:
http://www.behinderte-nuernberg.de/

The mail informed all the charity’s individual departments that the Conductive Education Congress date is fixed for the 7th November 2009.
The aim of this congress, as I mentioned in an earlier posting, is to spread the word about Conductive Education aroundin the region:
http://www.susie-mallett.org/2009/06/next-german-conductive-gathering-is-to.html
To re-ignite interest.
The congress will take place in the Grand Hotel, Nürnberg, which is opposite Nürnberg's main railway station. Somebody considered this location very well because, for a change, this will mean no trekking miles with laptop, posters and suitcase across huge cities or down country lanes, as has often been the case for those attending earlier Congresses.

In this week's mail not only were we informed of the date but also that this day is a compulsory training day for everybody who works for the charity and who comes in contact daily with children and/or adults who would benefit from Conductive Education. This actually means most of the employees, even if the contact is only on the telephone.

The total cost of the Congress will be covered by the employer, and the hours paid for as a working day.

I heard at a meeting last week that the charity has between four and five hundred employees. This number will certainly include many people who will not be present at the Congress but it will certainly involve a couple of hundred of them.
At long last, say I

The Verein für Menschen mit Köperbehinderungen e.V. has had more than fifteen years involvement in Conductive Education,and for most of these years I have been involved too.
There are however many people who work with this charity who do not know what Conductive Education is. Some do not know that we as a department even exist.
And we do still exist, just!
We have experienced at least one incident like the following. A two-year-old was referred to us through his doctor, which is great, but the child was attending one of the charity’s own integrated children’s groups at the time that didn’t even know about us!

Time to change all that

This is the first time in Germany that I will have attended a Congress where it is an official “training day ” for so many. From our own charity there will be Kindergarten leaders, social workers, physiotherapists, occupational therapists, social pedagogues, care staff, heads of homes, heads of workshops, Heilpedagogues, office staff, housing officers, and others, and at least three conductors.

Of course the Congress is open to all and many people from the region involved in all branches of providing services for people with disabilities will be invited.
The Association of Conductors working in Germany will be closely involved in organisating theCongress, so there will rather more than three conductors present.

I also expect, but as yet I have not been informed, that as is usual at such events the Conductor Association will be having its annual meetings of various committees on the day after the congress.

If this is to be the case it will be announced later on the association’s website:
http://www.konduktorenverband.de/index.php?page=aktuelles
I will get a letter soon inviting me to attend.

Conductive Education is about having fun!

My employer's finals words in the email that I received last week were:

Today I can already promise you that it will be an interesting, informative and communicative event - and also a social occasion!

I am sure that it will be. I have enjoyed the company of my colleagues at the Verein on many occasions. I look forward to a whole day in their company.

I have yet to establish what my role will be in informing these colleagues and others about Conductive Education, and of my work as a conductor.
My wish is to discuss András Petö and the "conductive soul". I think that it is more likely, and maybe more appropriate on this occasion, that I will discuss conductive upbringing with teenagers and adults, but I wo'nt be forgetting the soul.
Whatever I end up doing, I do hope that it does something to help to bring about the renewed interest in our work that the congress-organisers hope it will inspire.
Posted by Susie Mallett at 12:37

What an exciting opportunity this sounds for you and your colleagues to bring home the realities of Conductive Education to a lot of people in your part of Germany.