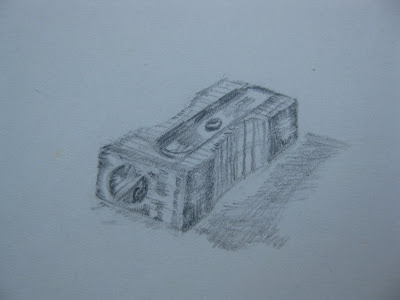 "Not a pair of scissors" by Susie Mallett, 1975
Did you ever think about all the movements involved in cutting something out with a pair of scissors?
Cutting remarks
Let us not ignore the fact that the hand without the scissors is doing lots of turning and twisting, and weaving here and there to keep up with the scissor hand. Also we can not forget that the eyes must turn here, there and everywhere to keep track of where the material to be cut is and where the material not to be cut is. and also where the fingers are that are to be cut under no circumstances !

There is the tendency to bring both hands, holding material and scissors nearer and nearer to the body, so the sentence I use most often while teaching someone to cut out is usually “Stretch your arms again”. This stretching gives more movement to both hands, and also provides a better view of the job in hand.
The sentence coming in a close second is “Look at your hands”. I need to look at them too and at the scissors. Only on one occasion as a conductor was I distracted but I quickly stuck the tip of my finger back on, pressed hard and did not need to have any stitching up.

Now what about the scissors?

Years ago now, unfortunately I no longer know where, I found a pair of scissors that cut out however you hold them, in the left hand or in the right. I would not be without them when teaching cutting out, but ordinary scissors need to be on hand to practise with too, as not everyone has ”magic” scissors.

While cutting, the hand must move forwards with the scissors while at the same time the fingers must press the blades together, and you have to open and close the handle with a thumb and one or more fingers stuck in funny shaped holes.

Are you still following?

While doing as described above with the scissors you also have to do lots with the other hand, turning and lifting the material being cut. usually following a previously marked pattern or line.

It is a really complicated procedure, but children can and do learn it, just like tieing shoe laces!

I love teaching both of these activities for the thrill on the children’s faces when they do it alone for the first time.

Today at last long last I taught a thirteen-year-old girl. who has been in our different conductive groups for ten years now, how to use a pair of scissors. Her delight was not so much in the mastering the scissors, it was more in the production of a ziggy-zaggy lion mask for our circus performance at the end of July.

She and I have much more delight in store as she cuts out and prepares the rest of her costume.

Photos will appear later. Today I was too busy preventing snipped fingers to have even one hand free for the camera.

This posting came about as the result of asking myself what have I achieved all day?

I had got extremely hot on my bike, cycling three times from one work place to another. That apart, I wondered whether I had actually achieved much in this sudden heat.
The MS group were flagging on this the last day of their block, so much so that we ended up drinking litres of water, relaxing to Mozart and playing stimulating board games to try and get things moving. No chance! We wilted even more.

After some thought I realised that I had done something rather special, and this had not actually taken very long to achieve. Thus the cutting-out story above.
There was also the secondary affect of the cutting out lesson. The child I was working with had previously been very disappointed by the fact that her mother’s train was late and she would therefore be collected by another mum. She calmed down instantly, disappointment almost forgotten, once she was involved in her mask-making project and had realised how well she was doing.
So not such a bad day after all, even in the thirty-degree sunshine.
Posted by Susie Mallett at 20:10

You asked: ‘Did you ever think about all the movements involved in cutting something out with a pair of scissors?’

No, I never think about this, because I never need to. I suppose there are those who do need this but I have never been one of them, this despite having learned to use scissors myself and later helped my own (normally developing) children learn to do so too.

Had I had to understand such activities, before or during their operation, then I might have never learned to do this myself, and I would never have been able to teach others either.
Cutting with scissors is not a bad paradigm example of this. Think, though, of any human motor activity, like riding a bike or driving a car, brushing your teeth or (your other example tying your shoes. Think of playing the piano, or hurdling. Think of your own examples for yourself.

In every case it the complete activity itself that is learned, not its component and associated factors, then to be fitted together to re-create some new, complex whole. It is the whole that is learned, while its complexities that remain implicit.

Of course there are better and worse ways of easing learners into new skils, and there is the vital question of motivation and reward.

There is the fact that the focus of the activity in learning, the use of this material tool, is outside the learner’s material being, and the task (and its learning) is inconceivable without, say, the goal of directing the scissors’ cutting point to follow the line, achieve a particular end etc.

There is the further fact that this material action is irreducibly meaningful and that, by mastering the activity, we incorporate into our developing selves some of the created meaning and knowledge of our own our historical culture (Activity Theory, Leont’evs original, not the silly post-modernist nonsense that has appropriated its name).

It it not, therefore something that can be reduced to vulgar task analysis.

Thank you for describing the beautiful intricacy of the task so well.