Metamorphosing over the weekend 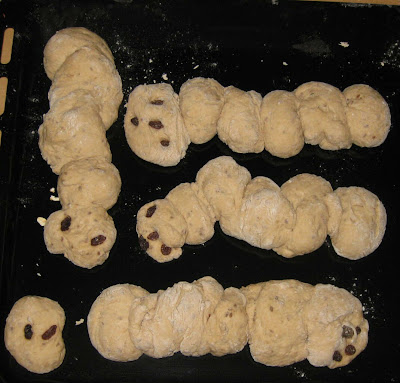 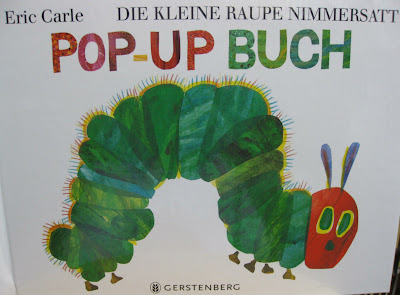 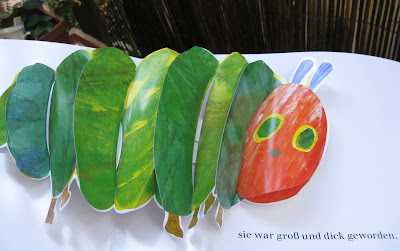 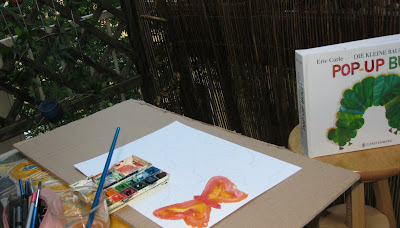 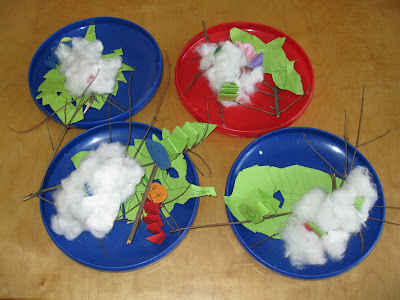 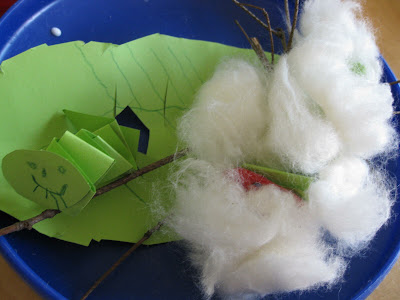 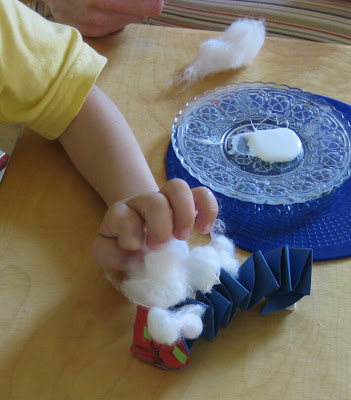 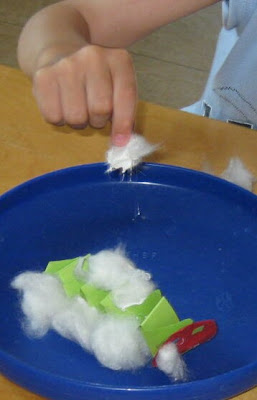 It began as the adventures of Knautschi and Co. but it is now becoming a Hungry Caterpillar look-a-like story!
The children got so carried away feeding the caterpillars with everything under the sun. They fed their caterpillars all sorts of odd things that they found in the toy food box, so we ended up singing the hungry caterpillar song, about his getting tummy ache from eating sausages and lollies, gateaux and muffins, all week long.

Of course at some time during the week we have had to make bigger caterpillars, as with all that food they simply would not stop growing. Until today that is.

Now the feeding and the growing has come to an end.

Today the caterpillars made their cocoons

Actually we decided that, because the caterpillars are made out of cardboard. we might have to help with the cocoon-building. Today, since we used cotton wool, the cocoons are white ones, like silk-moths make. The children pulled off wads and stuck them all over their caterpillar.
At first it was difficult for the children to let their caterpillars disappear, as they have got to like them over the week, but they told me they were brave, some even brave enough to cover up their caterpillar’s face!

The caterpillars will now have the weekend to do whatever they have to do to metamorphose and appear next week as butterflies. I have the weekend too, to do what ever I have to do so, that they can appear as butterflies.
We had a really jolly arty-crafty thirty minutes today. At first talking about and then looking at the caterpillar and cocoon in Eric Carle’s book, then deciding whether any one wants their cocoon to be brown like the one in his bookIf so, then we will get the paints out on Monday. We were unsure whether our caterpillars would have enough time to work their magic inside the cocoon but decided that if the weekend is warm and sunny then it should be long enough. We only have four more days with this group so we are taking the liberty of speeding up the two-week process of change inside the cocoon so that it all happens over the weekend.

As I have visitors on Sunday I shall be preparing for Monday this evening.

At work I found the recent copy of Das Band. This is a quarterly magazine produced by the Bundesverbandes für körper- und mehrfachbehinderte Menschen e.V. It is full of articles about families, politics and events, has many adverts and sometimes book reviews.

It was here in this magazine that I read at lunchtime today about the fortieth anniversary of the Very Hungry Caterpillar, and of the new pop-up version that has been published to celebrate this anniversaryalong with Eric Carle’s eightieth birthday.

On the way back home this evening from today’s second place of work, I discovered a tiny bookshop not too far from my flat, I parked my bike, popped inside and low and behold there was the very pop-up-bookup there on the shelf.
It is now in my bag ready for work on Monday.

I have just spend a relaxing hour on the balcony snipping and painting. I was preparing a painted example and blank butterfly forms to be beautified by the children. That is also now all in my bag ready for more hours of fun next week.
PS I nearly forgot. There was another episode on Tuesday. We did some baking and made some bread Knautschis. Now that was fun! It tasted good too.
Notes

I love the photos, Susie. Thanks for sharing!