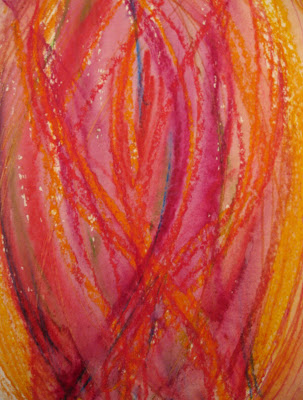 "What do you do at work?
Are you carrying a flame for someone or flame-throwing?
I prefer the riskier activity

I was sitting out on my pretty balcony one evening in the moonlight, enjoying a moment or two between drops of rain with a few candles alight around me, and I remembered something that Andrew Sutton had once written about torches, asking about who is carrying them and how and for what purpose.

I continued pondering the subject on numerous cycle-rides back and forth to work and the subject was sparked into life again by the recent discussion on Andrew's Independence Day posting entitled "What use is "Physical therapy"?" in which he referred to the posting where I first read about torches.

Andrew wrote about them in a posting called “CE: a lesson from Bobath” as long back as January 2008. Bobath came up again on this more recent blog that sparked ofa lively discussion whose embers are now smouldering, waiting to be puffed into life again.

In the 2008 posting Andrew mentioned the time-warped torch-carriers, those who are carrying an undying flame for something or indeed someone. These carriers, I believe, walk blindly onwards, or around in circles, with not much orientation or many aims for themselves, or purpose for their flame.

Then there are those whom Andrew describes as his torch-passers, I would call these the feeders of the flame, the change-makers, the people not only taking steps forwards but letting the flame spread sideways and upwards too. Some of these are even brave enough to allow the flame to fade a little before feeding and reviving it. Perhaps these are the risk-takers. Perhaps these are the conductive world!

So, with my thoughts on the torches and flame throwers again active, I asked myself whethers my own position in this respect is still the same as the first time that I read this. Do I still consider myself to be passing the flame, or am I really a torch-carrier?
My position remains unchanged. I am still all for passing it on.

If I were to carry a flame whose would it be?

András Petö’s flame?
Dr Mária Hári’s flame?
The Petö Institute’s flame?
My own flame?
Andrew Sutton’s, Rony Schenker’s, Norman Perrin’s, Peter Van Quadt’s, all those others who have lead the way, their flame?

Which would we choose if we wanted to carry a torch? None or all?

I don’t choose to carry any of these. I choose to pass on the flame of conductive upbringing. I choose to develop what I have learnt and pass it on to others to do with as they wish, hoping to to pass it on as many now before me have done.
No silent pools of stagnant water
A good thing about Conductive Education is that is has never had the opportunity to fall into a stagnant pond.

Everyone everywhere in the conductive world has had to fight for what they believe in, beginning with András Petö. Therefore it has never been allowed to remain as it was for long enough to stagnate. No one has ever been allowed to just sit back and get on with it.

Luckily we conductivists have never been allowed to just carry a torch or even to bear a torch, we have always needed to pass it on, there has always been the need for change, whether the change is good or bad is not to discuss here, but the changes have avoided stagnation and kept Conductive Education abreast of the times.

Yes, of course so much change can also have the affect of causing instability but I still prefer to be a torch-passer than a carrier. I prefer to be flame-throwing and taking the risk of getting burnt than sitting in my fireproof clothes and getting on with something that someone else told me was good.
It isn’t always!

If there is no stagnating pool then there is always space for questions and surely it is better to be involved in a developing, questioning system than to carry the torch for someone or something long since dead and in need of re-igniting.

Conductive Education’s flame is far from dead, although it may be spread a bit too thinly in some places and flickering a bit in others.

I am happy to be involved in a system that has always been a torch-passer, it is what Petö himself wanted according to his many “proverbs”, including one quoted in Andrew Suttons’s 2008 Bobath posting:

Nehmt das, was Ich begonnen habe, nutzt es und entwickelt es weiter…
(Take what I have started, use it and develop it further…)
Once a method is accepted, as Bobath’s was, its followers can sit back and relax, put down the torch, until of course needs change. Then it is extremely difficult to dig up the roots, revive the smouldering ashes and get moving in any direction again.

Conductive Education has never become established long enough for the flames to go out. It has never been allowed to become an accepted “truth”, so therefore it is ready and willing to make changes.

Ready to change to fit the needs of the time, which is really what Conductive Education is all about - providing for needs of the present moment.

And Conductive Education does change
It does so at record speed, in a great number of countries and centres simultaneously all over the world. It changes but because it is developing in so many cultures, in so many languages and in so many situations it changes in as many different directions.

I have worked with many Bobath therapist, luckily those with whom I have worked have been open to change. We have learnt from each other and they have seen the benefits of working a system like Conductive Education which still has no boundaries to contain the torches. The torch-passers are free to go wherever they wish.

Do we still want to impose standards?

http://www.conductive-world.info/2008/01/ce-lesson-from-bobath.html
Posted by Susie Mallett at 20:02

I have to correct you on one small matter of fact, before anyone else does. The nice analysis of the present state of Bobath/NDT was not my own, I was merely passing on something that Diane Damiano had written in a journal editorial (reference in my earlier posting that you kindly referred to).

I liked the image of the Bobath physios variously engaged as torch-dancers, and the easy transferability of this analysis to Conductive Education.

I do, however, in part disagree with you over a more substantive matter. I cannot accept that CE has been and is a stagancy-free zone.

Stagnant, ossified, mummified, fossilised, moribund, these words could all find areas of Conductive practice and thinking to be applied to. And have. Examples of the utmost heel-digging, the stubbornest resistance to change... come on, everybody knows that it happens and that it is not simply refusal to modify practices but also failure to confront new ways of concetulising both the work itself and even ways to researching it.

The question is, the relevant proportions of the old and the new ways...

You have written a stirring manifesto for change and I know that there are so many conductors and non-conductors who would happily subscribe to this.

I gets my vote and I do hope that the many similar fires burning out there can suck in enough life-giving oxygen to join together into an all-consuming firestorm...