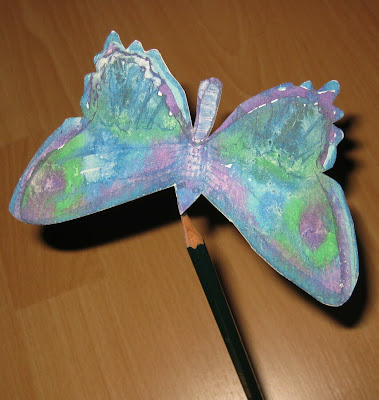 "Mrs Knautschi"
They went down a treat!
As my colleague was leading the lying programme this morning I gave her all the bits and pieces from my Sunday preparations and as always she came up with a lovely story.

"Knautschi had been away during the break, to Africa where he had met and fallen in love with a beautiful butterfly. They had in fact got married there. Today he had left his wife at home but she would be sure to visit the group one day soon."

I think That my colleague really meant that Knautschi would bring his wife to visit as soon as Susie had been creative again!

Don’t worry, Knautschi’s wife is all ready in my bag ready for tomorrow’s instalment!
Mummies and daddies, and babies

My colleague then asked the six-year-olds:

“And what happens when people get married?”

With what I thought was such an obscure question I imagined that we would hear about going to church, having a party or moving into a new house, but no. Only one child answered the question but he fed my colleague with just what she wanted to hear, as if rehearsed.

He piped up: ”They have children!”
Naming babies

Knautschi was so excited to show them his babies. He let all the children each remove a leaf from the basket that he was carrying and put it beside them. Then he allowed them to peer inside and introduced them to his as yet unnamed babies. Knautschi was a little worried as he had so many babies and he could not think of enough names, the children would have to help him.

Each child was invited to gently take one of the caterpillar babies out of the basket and place it on the leaf beside them, then they were asked to help Knautschi give them names.

We now have Julia, Marie, Marci, Frecki and Whuopi, all of whom have returned to their basket and are busy munching leaves and growing fast!

I wonder what will happen next in the Knautschi Soap.
I also wonder what I will be creating next! I hope that my colleague does not suddenly decide in the next episode to walk the babies in a pram.
Posted by Susie Mallett at 19:18