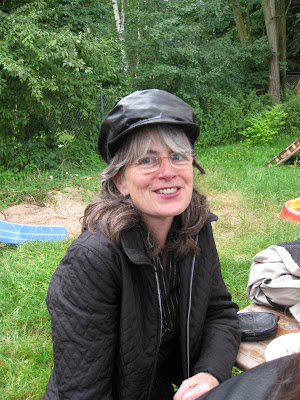 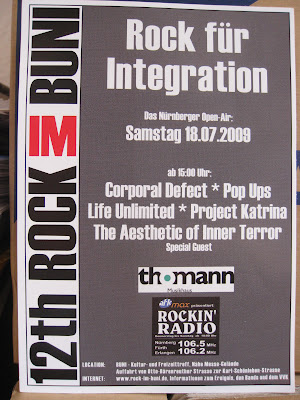 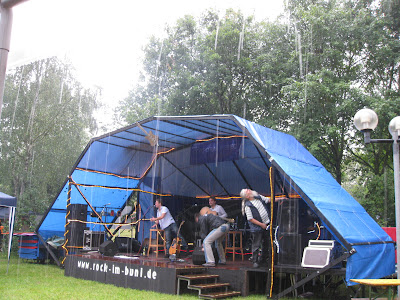 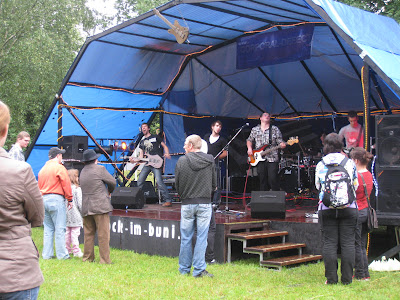 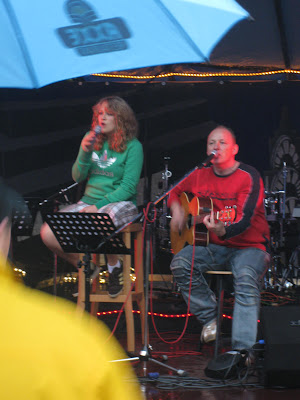 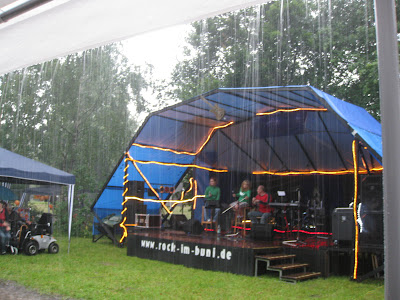 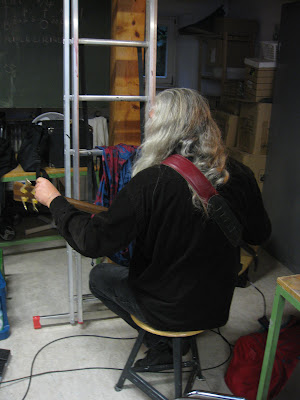 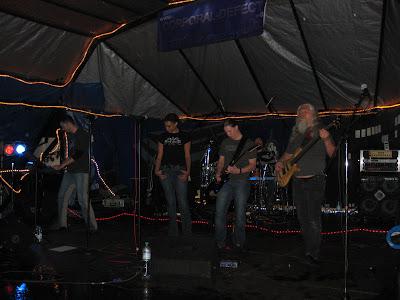 BUNI is a social centre in the south of Nürnberg for both disabled and not-disabled people, where just about anything and everything is on offer. Activities for people to take up in their spare time, pottery, painting, table tennis, table football, judo, music-making, coffee-drinking and chatting, outings and lots of “fests”.

Yesterday was the open air “Rock im Buni”, a yearly event organised by a friend of mine and his son and the other members of the band, "Corproral Defect", in which they all play. I think that I have been at this event just about every year since it began.

The "boys" of the band have spend many hours over the past couple of days, building a very professional stage. Only the best is good enough for the half-dozen heaviest rock bands that they could find to invite from the region!

"Corproral Defect" always appears first on the printed programme but last on the actual programme so that they can relax after all the work is done. All done except of course for the dismantling of the stage on Sunday.

As this has been already happening for most of July precautions had been taken at the BUNI, with lots of garden pavilions erected to keep the guests and the performers dry.

With the gaps in the cloud-bursts longer in the afternoon most people actually managed to arrive with dry clothes, many like me travelling by bike, but very few stayed that way as the rain got heavier and heavier just like the music and the intervals between downpours became shorter and shorter. Even though there had been a break in the clouds when I left for home at 10.30 p.m. I didn’t get very far before I got drenched.

Wherever is all that water coming from?

No one really worried about the rain, the mixing desk just turned up the sound when the rain drops got heavier than the music.

In the relatively dry patches we danced, ate bratwurst, drank beer and rocked the night away, to the sounds of The Pop Ups, Life Unlimited, Project Katrina, The Aesthetic of Inner Terror and, last but not least, Corporal Defect.

Rocking all over the world

Music really is a universal language. There were no barriers in this Fest yesterday, we were all there for one reason, heavy rock, and of course having a good time. We were out there between showers, with hands clapping above heads, heads shaking till they nearly fell off, were jumping up and down and rocking.
Status Quo eat your hearts out!
Who put the lights out?
10p.m. and Corporal Defect at last on stage. And what happened? The water got in and the lights failed
But the engineer kept the sound going!
The Fest was a great success, despite the weather.
PS I discovered that the centre is looking for a volunteer to run its watercolour-painting classes. I am willing but, as it is an afternoon course and I am still a relatively young rocker who has to go to work in the afternoons, it is a non-starter.
The centre now knows where to call if it needs someone for weekends or for courses taking place later in the evenings when younger rockers have finished work.