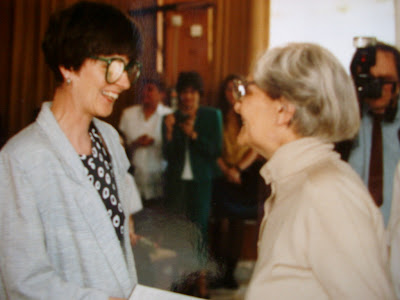 "Eye contact"
But I doubt it!
The photograph above is of a moment that I will never forget, just one moment, maybe the only moment when Dr Mária Hári and I looked each other in the eye. A very special moment of understanding.
It was a moment that I really thought, right up to the very last second, would never happen. Many people, not just me in my studies, fought hard so that it could happen. Thank you, all.
In June 1993, for me, with diploma in hand this was the beginning of the next episode,
"Return of the Proverbs"
Critical comments

I read the Petö Proverbs several times when they first came into my hands. There are quite a few of my pencil marks in the borders, question marks, crosses and a few comments like “Timing” ,“Really?”, and “Whatever is that?”.

Right at the end I have written “It seems to me that these are all very small parts of many wholes. Words taken out of context.”

To James House, as seen in the title of his “proverb” copy, they appeared like “Whole truths”, whereas to me they appear to be parts of some whole that I can only guess at. And they are not necessarily “truths” but somebody's version, at a particular time of observation or listening.

For example, one of the proverbs is:

“Athetoids have no problem with perception what-so-ever”.

Could this perhaps have been taken out of context from a conversation or even a lecture, or during observations in a group when somebody pointed out: “As you can see in this situation the athetoid child has no problem with perception whatsoever”?

In such a particular context I have no argument. It may be a valid statement.
This so called “proverb” in my opinion, and experience, is not.

Not "proverbs", and not all "truth"

I prefer to look at this list of the so-called Petö’s Proverbs as snippets of thinking that I can deal with as I did the one above.

There are some “proverbs”, though, that I cannot even take seriously at all. Some for which I cannot for the life of me visualise a situation in my conductive work where such a comment might be applied.

I frequently ask myself while reading down the list “Why would I as a conductor feel the need to say anything like this?”

For example I wonder how anyone trying to pass on knowledge of Conductive Education would actually state the following “proverb”:

“Repetition is like fishing. Some people can enjoy doing the same thing for hours.”

What can this mean? Whenever would I say it and to whom?

Most people can enjoy doing something for hours and it has little to do with the repetition of the actions.

I have often been fishing. It is relaxing, as are many of the activities and hobbies that I follow. Fishing isn’t any more or less repetitive than other hobbies that people enjoy, like playingcricket, making models, jogging, cycling, painting, reading etc. The enjoyment comes not from thenrepetition but from the learning. It comes from the development of a skill, from the unexpected, from the changes one sees in oneself.

I will throw just two more "Petö Proverbs" into the fray and wait to see what you make of them.

“It is important for the child to learn that everything has its place”.

“ The more complicated the task, the more the child performs”

I await your comments!

Perhaps some of you can visualise situations where such things would have been said, or conversations from which they could have been extracted.

Or perhaps you can think why Ester Cotton thought it so important in relation to what she was learning about Conductive Education that she felt the need to write them down or copied them down on to her long list.

More importantly, like with everything that we read in Conductive Education about what are said to be the words of András Petö, we should question who has written it and why?

There are no laws and regulations as far as Conductive Education is concerned. András Petö was still developing his ideas at the Institute in Budapest up until the day he died, Dr Mária Hári continued the work, I hope that this continues to this day.

Conductive Education has never really been widely accepted, like the Bobaths whose methods were accepted to the extent that training courses are now available throughout the world, with “whole truths” passed on from one physiotherapist to another. Conductive Education because of not having the same rooted acceptance, continues to develop.

Sometimes this is good, sometimes this is bad, that is not what I am discussing here. I just feel that it is better to be involved in a system that for ever changes, with people questioning it, rather than being in a stagnant pool.

Wherever we are practising our craft we should all be doing the same, questioning, trying out new ideas, progressing, developing and spiralling upwards along with our clients.
Posted by Susie Mallett at 15:51