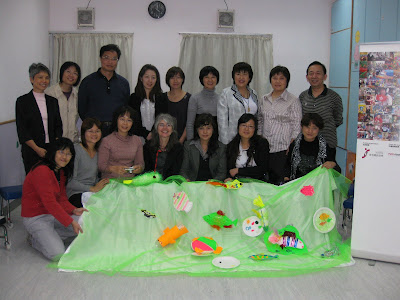 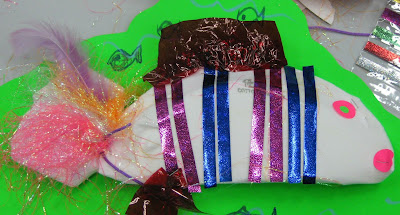 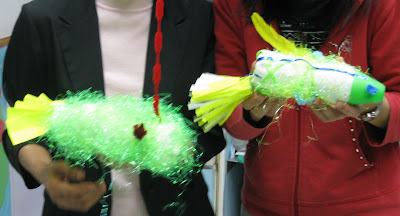 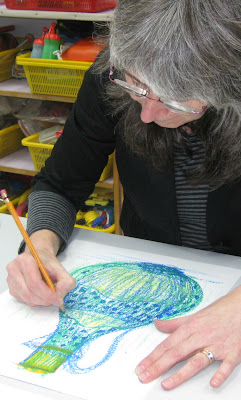 Engrossed in my work 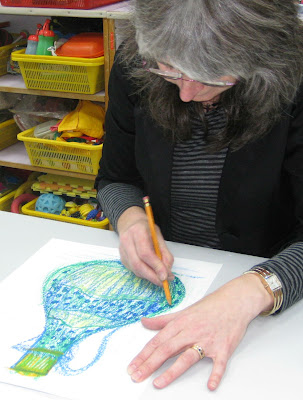 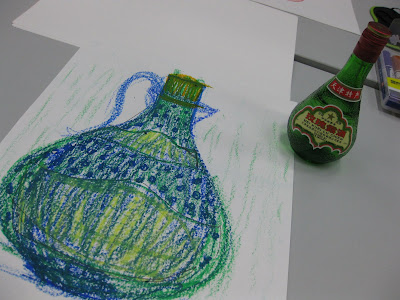 The bottles that I painted
First the blue one with the handle just a shape that I imagined,
then the green one was done through touch only.
Although blinded-folded, though, I seemed to know what colour the real bottle was!

Re: Ivan Su's post Congress workshop. My thoughts during this workshop were that we should have gone through the whole of the Congress, and any time spent later meeting people and in discussion, with a much better understanding of SAHK and its "culture" had we all heard Ivan’s most brilliant lecture first.

As it was, the very small audience was so tired by the two jam-packed previous Congress days that we could not do it justice. I was actually enthralled by the workshop and how Ivan was enthusing us, despite our exhaustion.

Even if my eyes were physically drooping I was wide-eyed mentally as I soaked it all in.

One thing that I realised among other things was that having such a business-like approach is what is missing in most centres offering CE in the West. I do not mean by “business-like” that it is about making money, it is not, but it is about not loosing money and having enough resources to provide for the best life-style possible for clients.

These resources are the human resources and yes, they do cost money. Not only that, SAHK has a psychology department, all four of the centres that I visited in my two weeks in Hong Kong had a psychologist in the team, a team more often than not headed, as Andrew Sutton mentioned, by a social worker.

I remember “talking” to Andrew a couple of years ago in an email, about how excited I was to learn about what was being done in Hong Kong “conductively”. Andrew had then just returned from China after a week of busy visits and meetings. He was still making up his own mind about what he has seen and said nothing to influence my enthusiastic mood.

Much later, as the 2010 Congress neared and I read more about SAHK’s work, I was even more convinced that my own conductive-style living and upbringing was nearer to what was happening in Hong Kong than to what I experienced in some other conductive centres that I have visited in the West.

I was not at all worried by the time I actually got to China, that I would be disappointed or that my mind would have to change.

I certainly was not disappointed

From what I listened to, observed, and heard in Ivan Su’s post-Congress workshop, SAHK has developed a conductive culture in all of its teams in a way so similar to the conductive cultures that I strive to develop within the structures of all the families with which I work.

I say again now what I said to many of the people I met in SAHK's centres, I really am very impressed and learnt a lot that will help my own development.

I wonder if I would have came away with the same positive feelings if I had only been in Hong Kong for the four days of the Congress.

I know that that final, post-Congress workshop was the key to understanding much of every thing that I had seen up to that point and it gave me a very good idea as to how I wanted to spend the following week in Hong Kong discussing and observing conductive work .

I came away hopeful of more of the same! The determination of these teams of people at SAHK was inspirational. It showed me that it really can work on a large scale.

It works fairly well in my small world of conduction here at home, where teachers, school aids, parents grandparents etc., all work with a conductive aim for our clients. But that is small fry compared to what I saw in Hong Kong.

I came away inspired and even more determined in my own efforts to teach more families about conductive upbringing.

It is already taking place, it seems that I only have to think about communicating to a wider audience and it happens. As if by magic ,as my athetoid clients would say!

As far as the “wetwear problems” go, those that Andrew Sutton described when discussing the Social Networking Platform, I encountered none in my meetings once I was in Hong Kong. Perhaps I too should give it ago on the Platform again. Like Andrew, as the Congress neared, I had eventually given up on it.

I had been looking forward to having a Christmas-card photograph taken with a mug of Gluhwein in my hand at this market. I asked many people its whereabouts while in Hong Kong. I even had some Hong Kongers searching the Net. I searched Andrew Sutton’s blog and mine for any reference to it, to no avail. I should have looked in the social networking site where I think it was also mentioned but by then I too had just about given up on the Social Network. So as it turned out, I too missed the Christmas market.

But I did see a huge market in Causeway Bay as I was travelling on the top deck of a double-decker tram, having visited the headquarters of SAHK, in Hong Kong’s North Point.

The market looked like a mini-expo and the signs indicated that it was selling “all things Chinese”. The place was still swarming with visitors at six o’clock in the evening. I made the choice of travelling further down the line to have supper at the Hay-Hay, on what was my final evening in Hong Kong.

Perhaps I would have had an even better choice of food had I taken my weary legs to the front of the tram, paid my two dollars and jumped off at the market, but I carried on. In the end my meal of cashews with prawns, and fried rice with veggies, was a perfect end to the trip!