There is one person who you really must meet 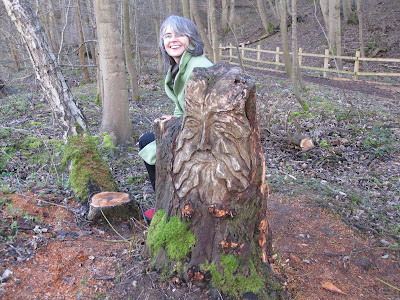 Meeting a green man in an ancient woodland.
A wood full of lime kilns and ice houses, with a green me.
The green man was discovered by my sister at Whitlingham Broad, Norwich, 14th February 2011
This sentence that provides the title of this posting was spoken to me on my arrival in Hong Kong, on the Saturday evening before the pre-Congress workshops began.
At the time I had no idea why I should meet the person mentioned but, by the time that pre-Congress workshops the Congress and the post-Congress visits were all over I most certainly did know, and I was very happy to have had the pleasure of meeting her.
Off to a workshop
On the Sunday before the World Congress started I took myself out of the hotel door, armed with a map to guide me through the streets and the underground rail network to reach Kowleen, to take part in a pre-Congress workshop, in Cantonesse, about using art with children with disability.
In an email that I had received from the secretary of the Congress several months before, soon after I registered for this workshop, I had been asked whether I had made a mistake by registering for a workshop that was to be held in Chinese. I had not made a mistake and as it turned out I had rightly believed that I would manage all right, as a workshop about art would be mainly visual.
Armed with a map
Back to the story of the scary journey that took me on to the busy streets of Hong Kong and its to the underground railway. Even on a Sunday the place was swarming. I actually noticed no difference in the amount of traffic and people on the streets on different days of the week, or even at different times of the day. For me it was always busy, like speeded-up film image of street scenes, people scurrying like ants everywhere.
I do not like walking around with a map in a foreign place, as I think that it makes me look very vulnerable, I was soon to learn that I had apparently been giving out very different vibes, even with a map.
On the underground I made the change to a different line and settled down to count the stops before I had to get out of the amazingly long, bendy caterpillar of a train.
Meeting Sister Joan
Just before the doors shut a small lady dressed in black hopped spritely onto the train, with that style of movement that only elderly people who appear to be younger than their age have.
She stood beside me, looked me up and down and, in a wonderful Irish brogue asked tentatively whether I was in Hong Kong for a conference. I do not even think that I answered in the affirmative. I think I just said:
"You must be Sister Joan!"
Unbelievably, she answered with a question:
"Are you Susie Mallett?"
We continued on your journey together, deep in conversation. Already I was discovering why it had been suggested that I should meet this lovely lady.
Sister Joan and I travelled together to the workshop that was held at the Marion Fang Kindergarten, a place that Sister Joan holds dear to her heart. She wanted to show her face as a sign of support for her "young girls", as she called them.
By the time we arrived we had got to know each other enough for Sister Joan to tell me how she had been observing me in the underground station and had been impressed by this tourist who gave the impression that she knew where she was going. Well, I suppose I did know where I was going as I had a map in my hand and with a map one cannot go far wrong. But it was nice to know that I had shown an air of confidence and had not appeared to be the vulnerable tourist that I felt I was.
Being introduced
In the evening of the same day there was a big feast to celebrate the opening of the Congress. Just after I arrived directly from the workshop, still with paint under the fingernails, Sister Joan was grabbed in one hand and I was grabbed in the other of the mutual aquaintance who wanted to introduce us. What a surprise it was for him when Sister Joan and I then greeted each other as old friends before telling the story of our first meeting.
I talked to Sister Joan on several occasions during the Congress and was delighted to have been able to arrange a more informal meeting with her during my extended stay in Hong Kong. Over tea and coffee she described the work of SAHK, both in Hong Kong and in Mainland China.
Sister Joan makes regular visits to the orphanages in China where SAHK is assisting in developing conductive upbringing for thousands of disabled orphans.
Read all about it
Sister Joan reports on the 7th World Congress for Conductive Education here on her Order's website:
http://www.columbansisters.org/areas/china/cecongress1_1210.htm
Posted by Susie Mallett at 01:10