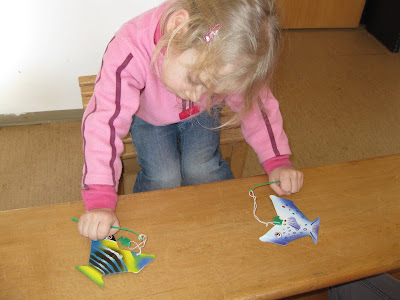 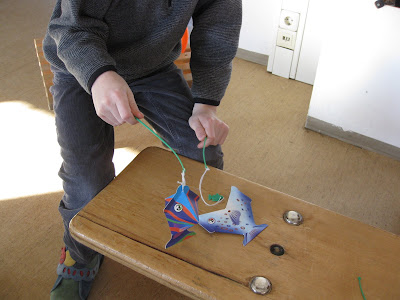 "Fishing for fun!"
I have been wanting to capture this game on film ever since I read about the submarine called USS Peto, named after a fish. The peto is a mackerel-like fish that you can read about here on Andrew Sutton's blog:

http://www.conductive-world.info/2011/01/trivial-persuit.html
The littlies had so much fun when the fish snaped at their bait and they rejoiced in the fact that they remained seated throughout. The noise when the fish snaps sometimes gives the children quite a fright and they do well not to jerk too much and by doing so fall off their stools!

Just another instance in which the children are so intent on what they are doing that they do not realise that they have learnt to sit on a chair while waving their arms around. It is lovely to watch them, especially when the fish takes the bait. Then they tug on the line so instantly, just like one would in reality. Sometimes the fish and rod fly onto the "shore", like in a real fishermans story. The result: more giggles.

The "giggle programme"
When I was first working in Germany we had a teenage group who came after school to us. Directly after lunch we separated the boys and the girls so that they had the privacy to learn dressing and washing skills and to talk about their fears and problems and to look for solutions.

These children attended the same school but were of different ages and so in different classes, This meant that they had not seen each other all day. So they enjoyed a girly chat about the.latest fashions and the latest boyfriends. They also enjoyed a good giggle. I made time in our plan for five minutes of giggles and incontrollable laughter! Sometimes I even left them to it, to discuss boys and other things that are not for the ears of a conductor.

I think it may be time for a "giggle programme" to be slotted into the afternoon tea-time group too, but this time I want to take part. It was so lovely laughing with them last week until the tears rolled down my cheeks.
Posted by Susie Mallett at 20:52