Oh yes you can! 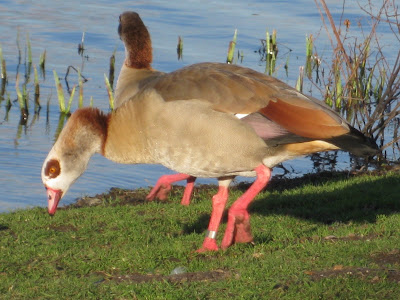 Egyptian geese in Norwich, 14th February 2011
This morning I received a copy of an email that has been moving between my colleagues in Germany, sharing with me the link to a very interesting film that can now be seen on the link at the bottom of this page.
I first viewed this film on video in 1997 when I was working in Calgary. It has been an inspiration to me and to many clients, parents and carers with whom I have worked ever since. It has also enthralled about a hundred people who listened to the first public presentation that I made about conductive lifestyles for adults, in 2000 soon after I had started working with groups of adults in Nürnberg.
Inspiration, for young and for old

I first showed this film to my young client who lives in Northern Germany when he was about thirteen years old. He was so impressed with the success achieved by the man featured in the film that he has regularly asked me over the past seven years to show him the film again.

This client of mine always finds the comments made by the therapists featured in the film in a way amusing but also provocative. Even when he was very young he was determined to prove them wrong, even though he did not know them personally. He is still working hard on proving them, and some of his own teachers and his own therapist, that it is never too late to learn, especially when living a conductive lifestyle.
Thank you, Lars, so much
I have mentioned Lars Mullback on my blog before and I have thanked him for providing this motivation and inspiration to me and so many of my clients and their families. I thank him again now for making the film available on the Internet so it can reach a far wider audience and inspire many more people.
http://movewalk.mullback.se/konduktiv-pedagogik
Thank you.
Posted by Susie Mallett at 01:16