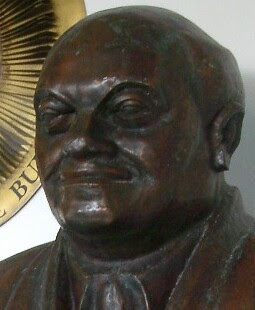 Who knows how he really was? Not many people nowadays, I expect. Anyway, here is another anecdote about him to share with you.

This snippet comes from the Nök Lapya article about the Petö Institute that I alerted Andrew Sutton to earlier this week, the article that he mentioned briefly on his blog.

I thought that I would translate just small part of it, including the piece that suggests that this is how Petö was, just a little more for us to add to (or distract from) the little “knowledge” that we may already have about our mystery man.

The rest of the magazine article informs us about some parts of the life at the present-day Peto Institute. Interesting is the description of the live-in parents' school where children and their families from places outside Budapest come to learn about conductive upbringing, spending three weeks at the Institute two or three times a year.

There are quotes about the work from various conductors, anecdotes from students about their lives as students at the Institute and with the children, and also something about the work in the international groups. A Russian parent is interviewed and talks about her and her son’s experiences in the Russian-speaking group, and mention is made of other international groups for children and parents from “Saudi Arabia, Italy, Germany, Belgium, America and many other countries”.

“Stand up and walk!

One day at the world-famous Petö Institute

Standing, walking, grasping. For most of us the most natural things in the world to do. But there are children for whom it is not. It is these children whom the Petö Institute helps, develops and trains, give courage to, heartens, motivates, and strengthens and fortifies. People looking for recovery or improvement in their health arrive here from all over the country and from countries throughout the world.

I almost swooned, I could not believe my eyes when I first saw him, because he looked to perfection like a Buddha carved from green soapstone.

He spoke loudly (he hollered), he was brusque and he did not look me in the eye.

We bawled at each for a complete hour and a half before he finally had the grace to look me in the eye and notice that I was throwing him funny looks.

After this he called in the lady doctor and between them they ascertained that there was no place.

In the end he shouted at me (he ordered me) to call the attendants to bring in Pimpi.

They took him in to Petö who then bellowed at me to leave the room.

A couple of minutes later he lashed out at the door (maybe he kicked it), and roared at me:

Pimpi carefully (beautifully) took six steps, pushing a chair in front of him.

Afterwards Petö roared at me that he would have Pimpi leaving here to go home on his own two feet.

Well, now he is there, mornings and afternoons. For two hoursat a time they walk, all day they slave and exercise, they eat sitting at the table.

On Saturday the lady doctor told me that he will be walking independently . Pimpi is still aghast (frightened to death), and does not believe the half of it. Me, on the other hand, I believe."

Andrew Sutton, “Wii… and the WF, trouble up t’mill”-

Nowadays, in the UK, this sort of behaviour, thankfully, is entirely unacceptable. A complaint would undoubtedly be made to the Board of Trustees and a disciplinary procedure instituted. Peto would certainly be advised as to his future conduct. Now let's consider the serious matter of the damage to the Institute's property, the door ....

(For the benefit of those reading this for whom English is not a first language - or who are American and so do not understand irony - my Comment here is heavily ironic; an example of English humour.)