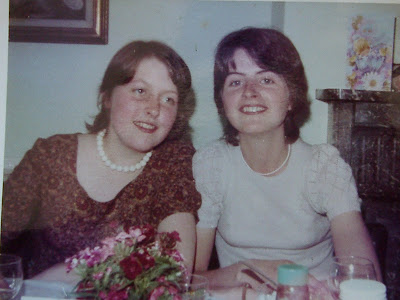 That is always how Election Day felt to me, even as a young child, when the entrance hall at junior school was turned into a Polling Station. It turned my seven-year-old world upside down. I had to use the back entrance when I arrived at school, where only delivery men and big children were normally allowed in, and then I had to walk through the big children’s playground, knees trembling slightly, before I got to the safety of familiar territory at the front of the school.

It was the same at grammar school, a Polling Station appeared in the foyer. We had more space, so this did not disturb my daily order so much, unless I had to go to the staff room for something. For me that meant a change and an inner chaos.

When I was younger there was also the chaos of the adults in the family getting to the Polling Station throughout the day. My Mum had to get my two Grandmas and two Granddads to their separate polling stations, before we came out of school. One set of grandparents kept a pub so everything had to be planned carefully to fit between the busy times. Mum could vote herself at our school, when she collected us. This all had to be done before evening so that, when Dad got home, having walked up from the station after driving his last train from London, could leap in the car and make his cross before the doors shut, leaving Mum at home with us.

I suppose that in some ways I enjoyed the comings and goings on Election Day, after I had got over the initial shock of school being different and Mum being busy driving here, there and everywhere, but still taking us home for lunch.

I would have enjoyed that chaotic evening on TV today, as cameras switch from one constituency to another, the counting starts and results begin to give an idea of what could be tomorrow. I shall take a look in the Internet instead, but it isn’t quite the same for me all alone in a foreign country.

Thinking about the inner difficulties of my childhood on Elections Day, the chaos that I remember, and the busy day it was for my Mum, I thought about what happens here in Germany and in Hungary and, I expect, in many other countries where the voting always takes place on a Sunday!

Families go out for a stroll, make their marks on a paper, have a chat with a neighbour they bump into, sit in a local café, drink a coffee and eat some cake, before sauntering home again. All very civilised, none of the rushing to the polling station before or after work, or between collecting the children, making dinner and transporting the grandparents.

I wonder whether this all has an influence on the number of people who vote in the different countries.

The first occasion that I was eligible to vote in a General Election occurred when I was an art student. It was the year that Maggie Thatcher first came to power. I was very disappointed that I had to give my vote to my Dad to do for me. I was away at art school at the time and would have loved to have done it in the flesh.

I was happy that Dad was my proxy, as it was Dad who had taken me on my very first visit to the Polling Station at my old junior school when I was eighteen to vote in a local election. It was he who had explained what I should do and it was also Dad who had discussed with me the pros and the cons of all the local counsellors, so that I had an idea of where to make my cross It was Dad who stopped me worrying so much about the big event of a first time vote, as he realised that I was terrified and determined to know what I was doing . So it seemed only natural that he would vote for me in my first general election when I was not at home to do so myself.

If England voted at the weekend I could have had a nice weekend with my family and strolled up the road with my parents to make my mark myself, stopped somewhere with them and maybe friends for lunch, and wandered home again.

Instead there was and I presume still is a Thursday of chaos!