"If you could see me now" 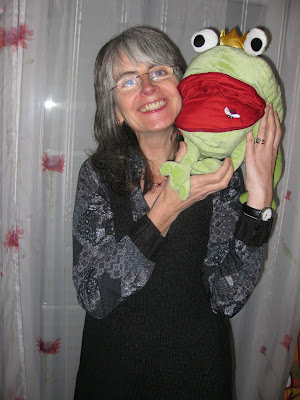 If my friends could see me now!

On Saturday I did a lovely bits-in-between activity-for-conductors. I went to town, bought last minute tickets for myself and a friend, who I have not seen for months, for the matinee performance at the opera house.

We watched and listened to, and absorbed with all our senses a wonderful performance of Sweet Charity, the musical. The choreography and the scenery were great, how the floor reflected the reds and blacks of the set and the costumes was something like in the magic mirrors at the fairground , and the glittery lights were dazzling. The music and the voices where the icing on the cake.

I sang along inside my head throughout the show. I knew all the words to many of the songs, which were all sung in English while the dialogue was in German. This is the way I like it, it seems right this way.

My mate asked me after the interval if I read the German translation of the songs. In the Opera House this is always projected just above the curtain, whether the language being sung is English, Italian, French, or some other foreign tongue. She had caught me in the corner of her eye taking a peep. Yes, I do read the words but not all the time. Now and then I look as it is a good way to learn how to translate and of discovering new and unusual words. I really enjoyed the feeling though of knowing most of the songs in English.

But how has this come about?

The musical was written in 1966 so in a round-about way that is the reason why I came to learn the songs. This was a few years before we moved house, when our gramophone still stood in the living-room , it was not till later that a television took its place. The gramophone stood beside the tape-to-tape recorder, this I believe was quite an unusual thing to have in those days, and both were used regularly.

To my delight I was treated very often to a sing-a-long by my parents. I suppose it could be said that they invented a form of karaoke! They had lots of records of musicals, Salad Days, Gigi, the King and I and, I presume, Sweet Charity.

My parents would sing-along and at the same time record themselves on the tape. My sister and I had so much fun playing it all back with the dog sometimes making himself heard in the background.

We could have danced all night

I have often been surprised as an adult when I have been able to sing along to old songs from beginning to end, just as my parents once did. I had not been aware that I had memorised the songs.When I was eight-years old all I had done was sit quietly in a corner listening. Sometimes I secretly snuggled up on the bottom step of the stairs, with my teddy under my arm, my ear to the door,dreaming of dancing in floaty dresses, when really I should have been in bed!

So not only did I have a lovely afternoon at the Opera House, spend an equally lovely two hours with my friend in a café afterwards, I have also got a head full of lovely memories. Memories of my parents, our lovely gramophone (still at Dad’s house), and of music ringing through our house. We moved a few years later. The gramophone was no longer handy beside the dining table and a television arrived too. Sadly the singing got relegated to high days and holidays, unless of course something they both knew came on the radio or television then there was no stopping them. And on Saturday there was no stopping me, although I made sure no one could hear me.

I enjoyed reading this post of yours. It is like sharing stories openminded with friends. That is just so much human...
Thank you.
Laci